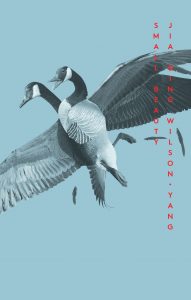 [The book and this review (although briefly) has these content warnings: transmisogyny, transphobic physical assault, death/grief]

I read this book in one day and it was the best decision! Like the ghosts/people who resurface throughout the novel I have felt its presence ebb in and out of my consciousness as I go about my life for the past week. It is a kind, sensitive, introspective and honestly deeply beautiful novel that had me marking half its pages because of the lyrical softness of the prose, or the relatability of the text or the enjoyment I had of tracing motifs and metaphors through it.

Small Beauty tells a meditative and sincere story of a mixed race Canadian Chinese trans girl named Mei. She spends a lot of time by herself in her dead relative’s home with her griefs over the death of her cousin, Sandy, her Aunt Bernadette and her grandma Nei Nei. But its not just a novel of sadness, instead it documents times before and after the various departures of her family and friends and showcases her complicated experiences and her heartfelt anger and love.

Mei, within the subtle, sweet and baring prose, doesn’t ever offer explanations of her identity to the reader or to anyone within the text either. Her transness and her whole self is allowed to simply be. Mei does experience a transphobic physical assault [pages 66-67 if you want to skip it!] but what is evidenced in the aftermath of this is her community, especially in the form of an older Chinese trans woman named Connie, supporting and looking after her. The evidence of some kind of intergenerational community was really warming and tender. The older “woodsy dyke” Mei meets whilst staying in the country is transmisogynistic but that too is treated with a softness, a multifaceted-ness and ultimately a forgiveness granted by Mei. The novel regularly refuses to pander to cis people and the narratives for trans folks that they create and one of the major reasons is because it treats things with nuance. Its also important to note that this is an own voices novel – that is that the author is a mixed race trans woman like Mei.

Trying to find an adequate example of the prose was difficult because so many small beauties are weaved throughout it. So this is one example of many of the soft ways in which images and words are formed:

The air is cold but he welcomes it. It is grounding and relieving to feel the ephemeral character of body heat. In the moment between chopping the last of the wood and the somatic realization of Winter, he is a new planet, a molten core spinning furiously, volcanic plumes billowing out of his breath. If not for the solidity of the ground below him he would believe that he orbited the forest instead of walked in it.

I loved the motif of the geese, which flies throughout Small Beauty and was done with this care and openness I really enjoyed. The geese offer a really lovely representation of community and family and ghosts. The geese, much like the prose, become this familiar presence to you, with this quiet strength. In Kai Cheng Thom’s review she wrote that it was a “deeply communal and strikingly unique” novel and I cant help but agree!