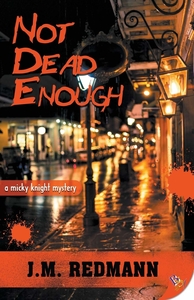 I didn’t realise until I was halfway through J. M. Redmann’s Not Dead Enough that it was a continuation of a series; I thought it was the first book in a series where all of the characters had very detailed backstories! Either way, Not Dead Enough follows Micky Knight, a private detective who’s been asked to track down a woman’s missing sister, only to find that someone matching her client’s description has been murdered.

The mystery is convoluted, with a tangled web of identities that could be Micky’s client or the client’s sister turning up in the unlikeliest places. I thought it worked really well, especially for the parts where Micky does the sensible thing and actually loops her detective friend in on what she finds! PIs who actually do the sensible and legal thing are still a novelty to me. Some of the twists seemed a little obvious to me, but for the most part the way that the different strands, cases, and Micky’s personal life all tie together stood up well! There were a lot of moving parts, and a fair amount of coincidence and overlap in the problems that felt a little too coincidental, although those were mostly minor niggles!

The fact that Micky’s backstory and friend group are explained well enough that I didn’t realise that I was starting with book ten of a series was really helpful, but I do wonder whether that means that people who are up-to-date on the series might be frustrated by the explanations. As part of that convoluted backstory, though, I do like that Micky’s non-crime problems are things like who gets custody of their friend group after she and her partner broke up, and that she does actually start to realise her flaws and work to fix them.

But anyway, it’s fun! I liked Micky and her circle, I liked how practical and done she was, and I liked this take on the classic pulp tropes! I don’t think it’s necessarily doing anything new, but if you’re like me and still revelling in people queering mysteries and giving characters happy endings, this one is pretty good!

[Caution warnings: Spousal abuse and murder, misogyny, homophobia, drug overdoses] [This review is based on an ARC from Netgalley.]

Ill Will by J.M. Redmann

In a city still rebuilding after Hurricane Katrina, New Orleans PI Micky Knight finds that her services are more in need than ever, as are her partner Cordelia’s skills as a physician. Micky has her hands full trying to fob off one client’s demands to discover the root of the fake medicine his nephew is taking and dealing with the aftermath of the torching of a slimy contractor’s property. When she gets pulled into tracking down missing clients from Cordelia’s practice, Micky finds that all her cases intertwine in a way that results in multiple deaths.

On the personal side, Micky and Cordelia are dealing with long hours and long separations, along with the post-traumatic stresses of the hurricane. Their closest friends are dealing with similar issues, along with the loss of jobs, insurance, and homes. When a medical emergency strikes close to home, Micky and Cordelia find their relationship tested once more, with no guarantees for a happy ending.

Readers familiar with the series will understand more of the backstory, but Redmann divulges enough details for a new reader to be comfortable with the book. Secondary characters have a strong role in Ill Will, allowing Redmann to introduce a lot of interesting material about the aftermath of Hurricane Katrina, the cleanup and reconstructions of New Orleans, and the struggles of people trying to rebuild their lives and homes. Fraught with issues of insurance loss, both for belongings and persons, the lines between those who have and those who have-not become sharper. Redman uses her characters draw attention to the personal details that many outside the area may not have known about in a way that does not overshadow the tale.

Ill Will is the seventh outing for Micky Knight, but the first I have picked up. Needless to say, I will be starting from the beginning to see the full story of this down-to-earth protagonist.