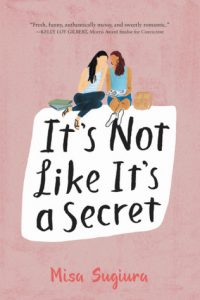 I must say this was a bit of a frustrating read. I went in with the intention to try and break my reading slump (because, you know, I had a review to write, so something had to give), which is why I picked a contemporary YA story – it’s something I haven’t read in a while. Unfortunately, this book didn’t make me much more enthusiastic about picking up another within the genre soon…

Sana is a Japanese American second-generation high school student, and her parents are springing a big life change on her: they are moving from somewhere in rural America (I’m bad at geography for the States, or anywhere really) to California. She goes from being one of three other Asian students in her high school, to a high school where a third of all students is Asian, with another third being made up of Latin American students. It’s a whole new ball game!

Obviously, with this big a shift in demographics, racism is one of the major themes explored throughout the story, and unfortunately Sana does not come off well. On the one hand she is very much aware of microaggressions and overt racist statements when they’re directed at her (quite regularly by her own mother). On the other hand, she somehow doesn’t compute that people of other ethnicities might have similar experiences, even if the specific aggressions and racism directed at Black and Latin people looks completely different from what Asian people tend to receive. She dissects the ways racism touches her so much that it comes off as almost unbelievable for her to not bring up the motivation or energy to even listen to others when they try to explain what their situation looks like – let alone trying to figure out those patterns by herself.

This is an important point, because Sana’s main love interest, Jamie, is of Mexican heritage. There is a scene where some pretty overt and frankly scary racism is directed at Jamie and her friends, while Sana receives relatively moderate racism (if there is such a thing). Afterwards they all discuss what just happened, but Sana doesn’t even attempt to suss out the differences in experience, even though they come with entirely different baggage and (potential) consequences. She ends up parroting some anti-Mexican phrases from her mother, and just generally really digs herself a rather deep hole.

The worst part is that she still holds on to these beliefs once she has some time to herself. She does make an effort to think critically, but somehow doesn’t compare the two different forms of treatment they received to see how similar patterns can lead to such differing outcomes. She’s so strongly entrenched in her own beliefs that she needs others to repeatedly point out where she’s wrong when shit properly hits the fan before even considering she might not be in the right.

Her friends aren’t always helpful in this regard, as they make for a bit of an echo chamber on some of the issues Sana is being called up on, and some of them find it hard to accept her exclusive romantic interest in women. The high school they attend seems relatively progressive, in light of the demographic split plus sporting a Gay Straight student alliance. Of course, everyone can be okay with anything until they’re directly faced with it themselves, and not all of Sana’s friends handle her coming out equally well.

This behaviour has a big impact on her relationship with Jamie: Sana’s friends believe Jamie is not good enough for Sana for a number of bad reasons, and one of them is that maybe Sana just hasn’t been with the right guy yet. It doesn’t help that Sana is insecure in herself and so finds it hard to trust Jamie to not cheat with someone else, something especially high on her mind because she suspects her own father is cheating on her mother. All of this combines for the perfect storm that forms the story’s climax, where Sana makes a lot of bad decisions, and not all of them are resolved in a satisfactory, sufficient, or believable manner.

The novel tackles a lot of really heavy subjects, and they’re all being interrogated from different angles, so intersectionality is clearly important for the author in these considerations. Sometimes that whole combination is just too much, and I feel the story could have benefited from streamlining some of these discussions, or possibly being told from an entirely different character perspectives: Sana’s mother and Jamie’s friend Christina were two of my favourites, both well written and complicated – sometimes more so than the actual main character – even while they are not perfect.