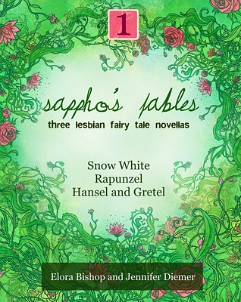 This month I’ve finally managed to read another retelling that has been on my TBR for years! There’s the bonus that it’s three retellings not one too! Sappho’s Fables Volume 1 by the amazing Elora Bishop (aka Bridget Essex) – who writes some good fantasy – gives us three sapphic retellings of classical fairy tales with imaginative twists.

“I saw nothing by red and Neve”

Seven is a retelling of snow white. Catalina is a young new wife to a horrible man that experiments on her. She finds herself attracted to his ‘daughter’ Neve. She finds out that he has had 6 wives before, all in the search of immortality. Together, Neve and Catalina break this cycle. This story had horror elements and there was an interesting play with fairy tale elements and sayings.

Braided is the retelling of Rapunzel. Gray’s mother sewed Gray’s fate as guardian of the Holity on another child – Zelda. Every day Gray goes to bring her food even though she doesn’t need it. After encountering a magical travelling fair connected with her dreams, Gray realizes she has to try to free Zelda. There were no bad guys here just people trying their best and making mistakes. A lot of casual queerness and acceptance too.

“Animals can be stopped by fear. Animals think. Ragers don’t”

Crumbs is the retelling of Hansel and Gretel. This is possibly my first ever story that I read with zombies and I actually liked it! Han and Greta live with their parents near heaps of trash where they scravage. They have to be careful of the ragers who were once human and have been infected. Their parents leave and the two decide to try to reach the metal forest, which turns out to be a city. There they are safe with Sabine and her brother Robert. Han is always sleeping and Sabine is always offering Greta food…I’m not sure I like the not-honest part but having already read another queer retelling of this story, I quite like this one.

All three stories had clear elements that identified the stories but were also fresh and new. I had many ‘ohhhhhhh’ moments when these elements such as apples, the huntsman, hair, rampions, sweets and witches were used. The retellings don’t focus only on the romance but offer a good story and the stories are short enough that can be read during one or two work breaks!

I’d recommend this book for lovers of fairy tale retellings, fantasy and imaginative tales and especially ‘Crumbs’ for newcomers to the zombie genre like me. 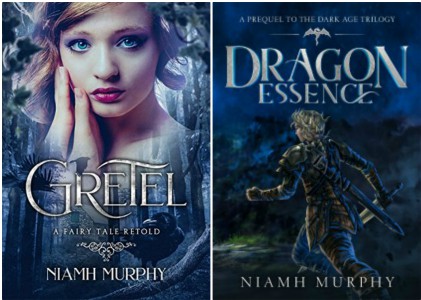 ”She had trusted two strangers in her house, offering them food and shelter. It was nonsense not to trust her.” – Gretel: A Fairytale Retold

With GDPR the copious amounts of author newsletters were at best purgatory. The ‘please subscribe to us’ emails were really great to weed out authors that I am not so interested in reading anymore. One author’s newsletter that I kept was Niamh Murphy’s. This author sends a lot of freebies and previews, is interested in fantasy and historical fiction (she’s actually a historian!) and sends advice and tips on where and what to read. I particularly liked her newsletter of Sapphic Fairytale Retellings! Anyone subscribed to her newsletter has received the short stories I will review below!

Despite knowing of this author, I hadn’t read any of her stories before last week, but now I’m intrigued. I started by reading “Dragon Essence: A Prequel to the Dark Age Trilogy.“This was, and and still is currently, free with a newsletter subscription! I have never read a prequel before the actual series, but this particular prequel was good at introducing the world and making the readers invested in seeing more from from it. The prequel is very short and can be read during a lunch break.

The plot surrounds Andra, a Captain of the Dragon Ward. Andra’s lover, Olwen is a mage set on getting a hold on a dragon egg – which Andra is bound to protect. Olwen gets killed, and the way to bring her back to life may see Andra breaking all sorts of oaths. This was a refreshing read, though very morally dubious. Why I could understand why the characters were acting in a certain way, I didn’t feel it was 100% okay. Be forewarned, there is violence on mythical creatures and violence of the human kind. The story contained also a preview of the first book Dragon Whisper. I love queer fantasy, especially with dragons and I’m interested to see how the wizards vs druids and the humans vs dragons elements will play out. I also do not know many queer fantasy books/historical fiction books with druids.

After I finished “Dragon Essence” I felt like reading the series…only it is not yet out. So I read Gretel: A Fairytale Retold, which as you probably guessed is a retelling of Hansel and Gretel: one of my favourite childhood stories! Gretel isn’t that long and is a bit fast paced, but then again, so was the original story. Hans and Gretel are introduced while running away from wolves and fortunately they are saved by a woman who offers them lodging until Hans heals. Gretel and Hans are away from home and have been looking for work. Maeve, the woman who saved them, lives in a cottage in a fort – all on her own. Gretel and Maeve grow closer in a really sweet way (and sexy way too as it involved a first-time sex scene in the woods!), but Hans is ever suspicious of the ‘witch’. Gretel has always had Hans and Hans had always had her back…until both those things are not true anymore. This story has a happy ending for the couple! It also has one of the best concluding lines from a character that I’ve ever seen.

While short, I think this story was great. It is a fast-paced story but there was no ‘love-at-first-sight’. It also featured a realistic fracturing of a family bond and growing romantic bond. I found Maeve to be an interesting character because she’s kind and feminine but still strong, physically and mentally. I absolutely hated Hans. Perhaps if it was longer, we could have seen a nice side of him. The writing was simple but effective and emphatic. This novella is currently free!

Overall, this is an author I would look into more. Niamh Murphy also has a youtube channel where she talks about books. I enjoyed discovering this author especially because of the fantasy and  retellings with a dash of history. I look forward to discovering new authors of those genres.