Gut Symmetries is a beautifully written love triangle involving two physicists and a poet. It’s a romance between science and mythology. Jove and Stella seem like an odd couple, the scientist and the poet, who knew each other since they were children and are destined to be together. Jove and Alice look like an obvious story, the older man and the young pupil. These two pairings seem like things we should understand — things get interesting when Stella meets Alice. Instead of jealousy and anger the two women begin a relationship of their own.

Jove is a self centered man, who never imagined the women in his life existing beyond him. Stella and Alice had expectations about who the other was going to be, but they surprise each other. As their relationship blossoms they move away from Jove’s influence.

There is one line from the first time Alice and Stella first had sex that I really appreciated. Winterson writes that, “Desiring her I felt my own desirability. It was an act of power but not power over her. I was my own conquest.” It really resonated as to why women appreciating each other can be a huge thing in a patriarchal male gaze world.

The beginning was slow, but it picks up as it starts to explore the world around the characters, how they got to the tangled mess of their relationship, and how their lives got them to this place. Winterson starts catching us up with action that has already happened. The plot doesn’t provide much forward momentum until close to the end.

Winterson comments on the nature of the novel that she’s creating. As her character relays her own past, Winterson writes, “I should have preferred it to be neater, tauter, the pace of a mystery, the thrill of a romance. What I had were fragments of colored glass held up to the light . . . This is my signal flashing towards you.” They’re absolutely beautiful fragments.

The ending gets a bit gory, but always wrapped in beautiful imagery. The prose is consistently wonderful. Winterson uses the language of science and mythology to draw up an intricate world.

The chapters get their titles from tarot cards. Winterson juxtaposes the ways science and mysticism think about how the world is bound together. She incorporates physics into her poetry. She uses superstring theory as metaphor, and the novel gets its title from GUT symmetries, a concept that I’ll admit to not absorbing the science of. She discusses planetary movements in terms of both science and astrology, all getting to the idea that the universe works in a way that is larger than any one person.

Stella and Alice and Jove are their own actors, but also their families and heritage. The world she describes works within systems. There are patterns that are older than people, bound to repeat, or maybe not. Winterson writes that:

“In the Torah, the Hebrew ‘to know,’ often used in a sexual context, is not about facts but about connections. Knowledge, not as accumulation, but as charge and discharge. A release of energy from one site to another. Instead of a hoard of certainties, bug-collected, to make me feel secure, I can give up taxonomy and invite myself to the dance: the patterns, rhythms, multiplicities, paradoxes, shifts, currents, cross-currents, irregularities, irrationalities, geniuses, joints, pivots, worked over time, and through time, to find the lines of thought that still transmit.”

In Gut Symmetries Winterson explores the dance between a world with rules and repetition, and a world with spontaneity and love change who people are. 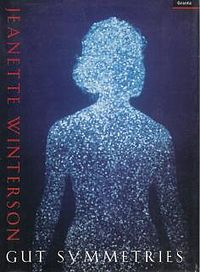 Although Jeanette Winterson’s 1997 novel Gut Symmetries is a book about a bisexual love triangle, it’s nothing like what you might expect from that description.  For one thing, it’s not a straight forward narrative of boy meets girl, girl meets girl.  You know from early on that Alice, the main character, falls in love with both Jove and his wife Stella.  So, when the two women finally begin their affair, it’s lovely, but not surprising.  This is not a ‘read-to-find-out-what-happens-next’ kind of novel.  Rather, it’s a read-to-find-the-next-beautiful-piece-of-writing kind of book.  Although there are some beautiful passages early on in Jove and Alice’s love affair, it’s Alice and Stella who really capture you as a couple.

What is really stunning about all of the descriptions of love is the way that Winterson weaves together musings on love with those about the nature of living and being.  You see, both Jove and Alice are physicists, and this fact is not insignificant.  It allows Winterson to describe in gorgeous language how the mysteries of the universe are beautiful, and eerily similar to the mysteries of love and desire.  She writes: “Perhaps it seems surprising that physicists seek beauty but in fact they have no choice.”  This is because when you go far enough, science is a kind of poetry, and love is a kind of physics.  As Winterson chronicles these strange and passionate love affairs, the beauty and mystery of the cosmos become undistinguishable from that of love.  She writes: “from the music of the spheres a perfect universe is formed.  Lover and beloved pass into one another identified by sound.”  My favourite of these passages, though, is this one:

Walk with me.  Walk the 6, 000, 000, 000, 000 miles of travelled light, single year’s journey of illumination, ship miles under the glowing keel.  In the long frost the sky brightens and the rim of the earth is pierced by sharp stars.  After the leaf-fall the star-fall, the winter shedding of too much light.  Walk the seen and the unseen.  What can be rendered visible and what cannot.

Like a lot of Jeanette Winterson’s work, her novel Gut Symmetries manages to be both contemporary and mythological.  Stella tells us, for example, that her “mother, big with child, had strange longings; she wanted to eat diamonds.”  After retrieving the diamonds when they exit Stella’s mother’s system, her father’s friends (diamond dealers, you see) discover one is missing.  Stella, apparently, is carrying this diamond inside her.  Alice’s father, after marrying her mother, promptly tells her he will not sleep with her until he is made director of a line at his job; years later, he abruptly flies home to England from New York to do so.

These two remarkable women meet in New York City for dinner, after Stella receives a letter telling her that her husband Jove is having an affair with fellow physicist Alice.  Shortly after their first encounter Alice tells us that “Stella turned towards me and crumpled my heart in her hand”; she asks Alice, “‘Do you fall in love often?’”  When they sleep together, Winterson cleverly reworks that old Freudian theory of homosexuality as narcissism through her description of Stella’s experience:

Her breasts as my breasts, her mouth as my mouth, were more than Narcissus hypnotised by his own likeness.  Everybody knows how the story changes when he disturbs the water.  I did disturb the water and the perfect picture broke.  You see, I could have rested there beside her, perhaps forever, it felt like forever, a mirror confusion of bodies and sighs, undifferentiated, she in me, me in she and no longer exhausted by someone else’s shape over mine.  And I had not expected such intense physical pleasure.  Why then did I trouble the surface?  It was not myself I fell in love with it was her.

Although this twisted love story takes an odd and grotesque turn near the end—you wouldn’t believe me even if I told you—I finished the novel with memories of Winterson’s exquisite deliberations on the nature of love, desire, and, dare I say it, the meaning of life.  I was particularly left with this heartening statement:  “Capacity for love in its higher forms seems to be peculiarly human although even in humans it is still peculiar.  This love suggests there is something beyond self-interest.”