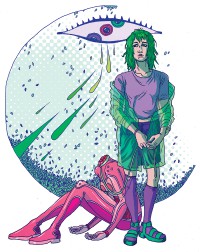 “She resolved to never call something good again. If something was truly good there would be no need to call it good, and it wouldn’t need to pressure her to think so. It would help or hurt her, that was all. Things were only good if they drilled to the end of time and could be accounted for on your final resting day.”

[just to note: this review was written by someone who does not experience transmisogyny]

I think I’m simultaneously the worst person to read this book and also one of the people who it will connect with on a very deep level. I really had no idea what I truly had got myself in for with regard to PSYCHO NYMPH EXILE though, so if I can say one thing with this review it’s to be prepared for a lot of stuff and to make sure to take care of yourself whilst you’re reading it (whether that means you go slow or you have to stop and not read it at all!). On her website where I ordered the book Porpentine writes content/trigger warning for everything and holy moly is she right. To illustrate here are what I would consider the major content warnings [but this isn’t a full list! be kind to yourself!!]: physical + sexual violence, blood, body horror, death, trauma/ptsd, drug use and sex.

PSYCHO NYMPH EXILE drew me in originally because of the name (I am a Psycho Nymph definitely) and it basically charts the story of a traumatised trashgirl named Vellus and her also traumatised ex-magical girl girlfriend Isidol. It’s a pretty grotesque, blood filled sick story written by a trashwoman for other trashwomen, Heartscape said in an interview that “It is very much written for weird women with cocks who are exiled from society”.

The reading experience was one of horror, sensitivity, relatability, fear and softness. The novel dashes in and out of your comfort zones with a brutality that can leave you reeling. I think I would have been less grossed out and shocked by the novel if I had actually looked into what guro-wave as a genre was (basically eroticism and the grotesque, as far as I can see), because it says that’s what it is in the description its just the title seemed so Me in so many ways I had to pick it up!

Within the novel mental illness is made incredibly and distinctly bodily, present and gross, refusing to be inverted and covered up. Despair Syndrom with Temporal Purge or DSTP, (a parallel with (complex)PTSD) is an illness that is formed from experiencing traumatic events and consists of various colourings that affect your body, some are parasites, some cause you to shoot beams of slime and light out, and others do even wilder things. As someone with [c]ptsd I found the presentation of DSTP to be painfully resonant; my experiences of it are bodily and I regularly feel like I’m producing all this traumatic sludge. I do, however, tend to be uncomfortable with the discourse that suggests that if only mental illnesses could be “seen” in whatever form, then they wouldn’t be made invisible when this isn’t true. Physically disabled folks’ disabilities do get undermined and invisibilised, even when they are incredibly physically present, and I think its important to just remember that.

A very cool thing I learnt whilst writing this review was that the physical structuring of the book was made to be accessible and to allow the reader to get a break – porpentine said “I want a book that’s more legible for people with brain damage” – and that’s why the massive eyes that break the text up are there!!

The book breaks a lot of boundaries, both in terms of the content itself and the relationships between humans/animals/machines, magic/mundaneity, life/death, creating these wild, fluid, liminal trauma spaces and shifting understandings of what bodies are and how they work. As a reader I also felt that my own boundaries were broken too and in ways that I’m not entirely convinced needed to be. After a while I felt like the relentless horror was pretty gratuitous but maybe that’s because of the genre and my own sensitivities. I would really recommend this review if you want to look into more perspectives!

PSYCHO NYMPH EXILE is a love story and a survival story and a belonging story. Vellus and Isidol’s relationship feels familiar and so heartfelt, and even after so long on from reading the book they have stayed with me in their own weird wild way.