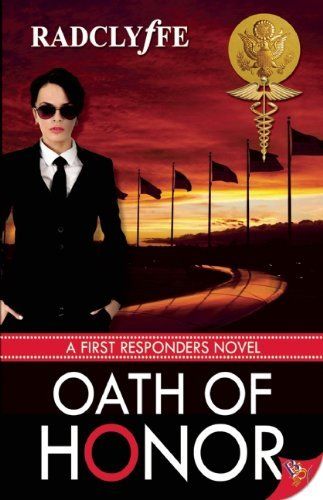 Oath of Honor recounts the reluctant romance between Wes, newly hired head of the White House Medical Unit, and Evyn, dedicated Secret Service agent: though their attraction is immediate (as it so often is in romance novels), the two suppress their feelings in favor of their professions’ singular goal – protect the president. But as a plot to assassinate the president unfolds, so does their romance.

If that combination of plot points sounds a little odd to you, you’re not alone: Wes and Evyn certainly have a steamy and engaging romance, but the romantic plot-line is muddled by the presidential assassination scheme. Radclyffe alternates viewpoints, throwing in scenes from the points of view of other characters, including the would-be assassin, a rival of the president’s who wants to pave the way for his own rise to power. It makes sense for a romance novel to have some suspense and drama, but this slightly disjointed assassination plot-line takes it too far, detracting from the romance that is theoretically the heart of the novel, especially since this plot-line is left hanging at the end of the novel (perhaps leaving room for a sequel).

Despite this significant flaw, Oath of Honor is still a fun read. Wes and Evyn are well fleshed-out characters, they have great chemistry together, and the first responders premise is certainly an interesting one. If you’re looking for a romance novel whose plot reads like a soap opera’s, and don’t mind the occasional foray into fragmented political machinations, give Oath of Honor a try.

Note: Oath of Honor is the third title in Radclyffe’s First Responders series of medical drama romance novels: each novel stands alone in terms of its characters and plot, but centers around characters who are first responders. Oath of Honor features snippets from the points of view of Blair Powell and Cameron Roberts, stars of Radclyffe’s Honor series.