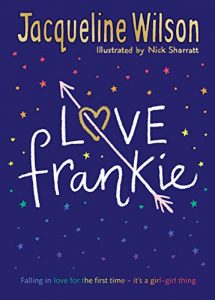 Jacqueline Wilson was one of my favourite authors growing up. Something about her battalions of weird, bookish, tomboy protagonists and their intense friendships with other girls really appealed to me.

Looking back on her extensive oeuvre as a fully-realised lesbian adult, I began to see what that connection may have been, and I always wished that Wilson had written an explicitly sapphic character somewhere in her over-100-book career. Then came the news, earlier this year, that not only was Wilson finally going to write a book about two girls falling in love… but that she herself was in a long-term relationship with another woman! I was delighted (to say the least), and couldn’t wait to get my hands on Love Frankie.

When explaining why she hasn’t written a gay protagonist before, Jacqueline Wilson said that she writes about children with problems, and she doesn’t see “any problem whatsoever with being gay”. This is true for Love Frankie, where the protagonist’s sexuality isn’t nearly as big a deal as everything else going on in her life.

Frankie is nearly fourteen, and having a rough time of it. Her mum is chronically ill with MS, finances are tight, she’s worried about her two sisters, and their dad’s no help: he’s left them to live with his new girlfriend. Even her best friend Sammy is a source of stress now he’s decided he wants to be her boyfriend.

Wilson is always strong at writing touching, troubled families. Frankie’s dynamic with her mum and sisters is so warm and true to life. I particularly liked the youngest sister, Rowena, with her obsession for collecting Sylvanian Families – I remember a lot of children like that from my own school years! The issues of illness and divorce are treated sensitively and carefully pitched towards younger readers.

Outside of her fraught home life, Frankie’s being picked on by a group of girls at school. But then their ringleader – the pretty, cool, wealthy Sally – turns out to be not-that-bad-actually and goes from sworn enemy to close friend.

As Jacqueline Wilson novels go, so far, so typical. Then Frankie starts to like Sally as more than a friend.

This central relationship rings true as an account of first love – exciting, intense, giddy, and confusing. However, Sally isn’t particularly likeable as a love interest. She’s hot-and-cold, teasing, and sometimes cruel. I would ask what Frankie sees in her, but who hasn’t had a crush on a popular ‘mean girl’ before?

Although I enjoyed reading this novel as an adult, I know that I would have loved it as a younger teen. I’m so pleased for all the girls who will get to read this at the same age as Frankie and see themselves reflected in the pages. 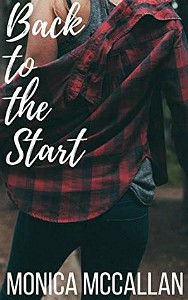 Monica McCallan’s Back to the Start is an okay read featuring the trope of rekindling first love. Although the book has a wonderful love interest and interesting plot twists, it’s bogged down with tedious writing and an unlikable protagonist.

Our protagonist is Remy who must leave San Francisco and return to Farmingdale after her grandmother dies. Although Remy only lived there briefly and hasn’t been back in twelve years, the small town left an indelible mark on her. She’s vowed to forget everything that happened there, especially Fallon, the beautiful and popular girl who broke her heart. However, their paths inevitably cross. As misunderstandings are cleared up and Remy and Fallon form a tentative friendship that blossoms into something more, Remy must decide exactly what she wants from life.

I struggled with this book. Although the plot is decent, I dislike McCallan’s writing style. Every other page is filled with phrases like “the blonde said” or “the brunette did” and it’s frustrating and boring to read. The writing is very flat and lacks emotion. I really would have liked some relevant descriptions because I struggled to picture people and places.

Remy is an unlikable, selfish, and narrow-minded protagonist. I couldn’t connect with her at all. But, she does experience some much-needed growth by the end of the book. However, I really would have liked the narrative to feature more of Remy’s change in attitude toward the town and other people. On the other hand, Fallon is the perfect love interest who is honestly too good for Remy. She’s a great and relatable character who is generous, caring, and sweet.

While the plot isn’t ground-breaking, it’s well-paced and kept my attention. There is a decent amount of tension and sweetness in the romance. I like that there isn’t an instant love reconnection between Remy and Fallon. Instead, they take time to rebuild their relationship, move past their issues and learn about each other. I particularly like the last few twists which finally allow Remy to show some growth.

Back to the Start is an okay take on the rekindling first love trope. While I love Fallon and the plot held my attention, I couldn’t fully get into this book because of McCallan’s writing and Remy’s off-putting personality. I wouldn’t read this one again. But, if you like the rekindling first love trope and well-written love interests, maybe you can give this book a go.