My recent infatuation with the Compass Rose series should have been all the warning I needed not to start an Anna Burke book just before bedtime. This dark, Grimm style and very gay retelling of “Beauty and the Beast” kept me reading well past midnight to get just “one more page!” Thorn, with its complex characters and their histories, goes so much further than just subbing in perpetually hungry wolves and a large ice bear for talking candles and singing teapots.

Burke does a great job with world building, and it doesn’t take long to get a sense of where you and our young protagonist, Rowan, have just been dropped. A very cold, very isolated place that one wouldn’t necessarily choose to live. Rowan’s father, a failed merchant turned aspiring fur trader, has had no choice but to flee the city with his three daughters and start a new life to escape his debts. While he’s not a villain by any means, he treats his children as commodities, and is preoccupied with returning to some status in society.

When we first meet Rowan, we see how different she is from her sisters. As the eldest, there’s a lot of pressure on her to take care of the family. It’s here we also find out that she’s betrothed to the neighbor’s son (let’s call him baby Gaston) and would very much prefer not to be. On top of it all, she absolutely hates living in this godforsaken, frozen little village. It doesn’t take long for us to get an idea that Rowan doesn’t love her homelife.

The Huntress, our cruel and mysterious “beast”, is something of a legend and a myth for those living in the nearby village. But she and the curse that keeps her confined to the mountain are very real. Winter isn’t just coming, it’s there all the time within the boundaries of her land. Our beast has been condemned to a life of solitude, and the cold and loneliness in the story are very much intertwined.

When a hunting party crosses the threshold of her lands and kills two of the Huntress’ wolf companions, Rowan’s father, one of the unfortunate trespassers, is spared by the Huntress only to commit the more serious crime of stealing a white rose. The Huntress doesn’t delay in retrieving her stolen property. Rose for a rose, thorn for a thorn.

I enjoyed the vivid descriptions Burke offers, and I haven’t been that creeped out by a flower since watching The Ruins. We see a lot of interesting imagery with the rose throughout the book, and some particularly unnerving scenes where the flower winds its way from one person and into another. Burke also does a great job getting to the heart of the characters’ relationships in a relatively short period of time. We see Rowan fighting to resist a growing attraction to her captor, and a reluctance to admit that this new life is as free as she’s ever been. We also catch glimpses of the Huntress’s past, and how this literal ice queen came to be cursed and live in an enchanted castle with her pack of four legged Hounds.

One of my favorite parts of this book, which made me laugh out loud, is an indulgent scene requiring the need for skin to skin contact for warmth — despite a perfectly serviceable hot spring in the basement of the castle. Thanks to Anna Burke for that fan service.

As usual, Burke’s prose is strong, and it particularly shines in this book. You will feel the cold in your bones. You will smell the musty old castle and its musky animal inhabitants, and taste the venison stew. The main characters are well developed, and we get to see both of their perspectives throughout the book. The big romance tropes here are age gap, ice queen and enemies to lovers. There is of course an iconic library scene, and an “it doesn’t matter now, just let them come” scene right before the curse is broken. While the general promise of happily ever after is fulfilled by our star crossed lovers staying together, we also feel the angst and pain of other consequences. And with that, Burke leaves us with a bit of her book’s winter chill. 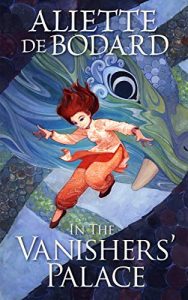 In The Vanishers’ Palace by Aliette de Bodard is a post-apocalyptic post-colonisation fantasy retelling of Beauty and the Beast. Yên is a rural scholar, who offers herself up to a dragon in her mother’s place to repay her village’s debts; Vu Côn is the dragon in question, trying to fix the world that the Vanisher’s destroyed and then abandoned. Together they live in the dangerous Escher-style nightmare that is the Vanishers’ palace, trying to raise Vu Côn’s teenage children and change the nightmare that the Vanishers left this world in.

The world-building is really cool; In the Vanishers’ Palace is set on a world that was modified beyond the inhabitants’ understanding by the Vanishers, who abandoned it when they grew bored – and people are actively trying to fix it. The scale of the problems are huge, and compounded by people like the leaders of Yên’s village, who are power-hungry monsters, but people are still trying, and that is something I need right now. And for all that the story is fantasy, it has science fiction elements woven in really well – yes, Vu Côn’s palace has impossible geometry, nonsensical architecture, and death lurking in every corner, but it also has a library that can just generate books, and a distinctly scifi room for Vu Côn’s patients. Plus, the magic of In The Vanishers’ Palace is language based, and the story gives Yên space to explore what is known about magic and the ways that common understanding isn’t always right made me happy!

The story itself takes the basic premise of Beauty and the Beast and focuses on it as a story of agency and independence. Vu Côn’s arc is specifically about her learning to trust people to make their own choices and have valuable knowledge and opinions of their own, and her romance with Yên is explicitly about them negotiating the consent and power dynamics of a relationship where one person starts as a prisoner/employee of the other. Vu Côn’s children are specifically trying to figure out who they are independent of their mother, and what role they can have in this world. And Yên is explicitly finding a role for herself after the danger of her village, where those not deemed “useful” and in danger from the village leaders. I enjoy the ways that motherhood, familial duty, and folklore are also woven into this story as integral threads as well, it really worked!

In conclusion: In The Vanishers’ Palace is the queer retelling of Beauty and the Beast that I didn’t know I needed, and it’s excellent. Definitely recommended.

[This review is based on an ARC from the author.]