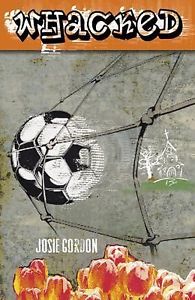 Lonnie Squires has an unusual profession for a lesbian mystery protagonist; she is an Episcopal priest. As far as I know, Joan Albarella’s Nikki Barnes is the only other woman of the cloth in lesbian mystery fiction. In fact, it is unusual to find religious references at all in the genre other than casual references to “the goddess” is some of the earlier, more feminist novels. As we know, most churches have not treated the LGBT community with respect, but if you have a calling, you have a calling and the Episcopal Church has been more queer-friendly than most.

Even so, author Gordon makes is clear early that Lonnie’s “calling” had more to do with the fact that the church had a women’s soccer team than any burning bush experience. In her relatively short career as a priest, Lonnie has become known for her ability to effect reconciliation; to smooth out differences between members of the church. When her bishop promises to give her her own rectory if she will travel to Eastern Michigan to mediate between two splitting factions, she jumps at the chance. Little does she know that she will become embroiled in a murder.

Although I’m not someone who likes a lot of praying in my novels, I confess to being a fan of G.K. Chesterton’s Father Brown stories. I also confess to finding Whacked enjoyable and strangely satisfying. But that satisfaction didn’t come easy. I found the setup to the mystery to be clumsy and less than plausible. For one thing, Lonnie lies to the police to protect someone she has met only half an hour before. Then she breaks into the murdered man’s house (before the police think of it, mind you) and finds a clue that shouldn’t have been there in the first place. Having said that, it is absolutely essential that she do these things—there is no plot without them. But if I gave real star ratings for these books, Gordon would lose a healthy part of one for forcing the plot in this way. She knows she’s doing it; when Lonnie finds the clue, she thinks to herself, why is this here? Yet its presence is never actually explained. Likewise, a sheriff’s deputy, after a casual look at the body, tells Lonnie that he was killed with a shovel and that the shovel had been taken away. But if it had been taken away, how did he know it was a shovel, especially since it turned out to be an unusual kind of shovel? This is actually a major flaw in a mystery novel because most astute readers would assume that the deputy must be the killer. And this shovel is very important to the rest of the book.

Still, I like Lonnie and disliked her partner Jamie, as I was meant to—just about everything Jamie does in the book is disrespectful to Lonnie. I liked the description of the small Eastern Michigan town, especially its Dutch traditions and odd-sounding cuisine. I liked the insider look at the old Episcopal Church, and I very much admired the way that Gordon managed to use soccer metaphors throughout the book. Such as when Lonnie is questioning one of the suspects and thinks she may be about to learn something important: “This felt like a breakaway on an open net, though I knew the defenders were right behind me and gaining.” Her use of this extended metaphor is among the best I have ever seen—and that is saying something.

Lonnie’s philosophy of reconciliation not only goes to the heart of the novel, but to the heart of our society, divided now more than ever before: “Love had great power. People could do great goodness with the love they felt, once they got past anger and fear.” I’m willing to give Whacked the benefit of it being Gordon’s first attempt and I’m looking forward to seeing whether in Toasted, the next novel in the series, my feeling is justified.