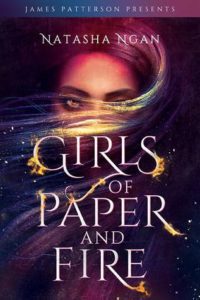 Girls of Paper and Fire by Natasha Ngan is a YA fantasy about Lei, a Paper Caste girl, who is forcefully taken from her family by the imperial guard in order to join the newest class of Paper Girls. Paper Girls are the most beautiful paper caste girls in the kingdom, chosen to serve the king as concubines for one year. Some of the girls are from the few influential paper caste families, offered to curry favor and bind their families closer to the power of the crown. Some of them are chosen from the country at large and either regard serving the king as an honor or believe the material benefits to themselves or their families are worth it. Lei, kept in line only through threats to her remaining family and already resentful of the imperial regime for previously abducting her mother, is caught between the rock of being forced to service the king when her mind and body revolt against the very idea and the hard place of the strict new realities of her life that she cannot escape.

Once in the palace, Lei struggles, not only with her lessons, but also with the company of the other girls. The noble girls not only have a head start on the knowledge and skills expected of a Paper Girl, but they’re not eager to include Lei in their social circles. They’re used to having maids and fancy clothes and performing courtly graces, and every time Lei struggles or makes a mistake, mockery and taunting is sure to follow. Some of the girls are also eager to be there, either from a desire to serve the king or for the status and benefits being Paper Girls will bring them and their families, motivations which Lei has trouble understanding. Lei becomes friendly with one of them, Aoki, but Lei constantly has to watch herself around her because Aoki is truly enamored of the idea of serving the king and won’t hear of Lei’s very real horror of the man. Being set adrift in a hostile environment would be tough enough, but Lei’s mental anguish at being used by the king is chilling. Paper Girls don’t have the ability to refuse to become Paper Girls, or to refuse a summons by the king when they’re in the Palace, so they don’t have the ability to truly consent, and Lei’s horror at her lack of agency causes her to panic and react in unpredictable ways. CONTENT WARNINGS: While this book does not depict the physical act of rape in lurid detail, it does occur and neither does it draw a curtain at the door to the king’s quarters. There’s physical violence, mental and physical intimidation, and general bad times along those lines.

Lei’s lack of agency is emblematic of the Paper Caste as a whole’s lack of agency. Despite the existence of a few high-status families at Court, as evidenced by some of the other Paper girls, most of the Paper caste is oppressed and taken advantage of by the Moon and Steel castes. What I really enjoyed about this novel besides the world-building was that Lei is actually a late addition to the plot to overthrow the King leading such a cruel system and make a better kingdom. They weren’t waiting for a prophecy or a chosen one, Lei’s violent yet inept rejection of her own fate literally bumbles into a well-laid and intricate conspiracy that is already in place and wasn’t looking for any other help. In fact, they would rather she just keep her head down and not mess them up, because she doesn’t have the training for this, which of course, Lei does not do. It’s an interesting change from the common Chosen One formula.

Also interesting is Wren, a fellow Paper Girl. Lei is fascinated by Wren, who is withdrawn but kind, unlike the other wealthy Paper Girls. Wren is a part of the resistance, trained from childhood and planted among the Paper Girls to gain access to the King. Wren also has to let herself be used, and she empathizes with Lei’s reactions. She alone among the resistance thinks that Lei should be included and possibly help them. Along the way, their relationship becomes physical as well as emotional, as they bond over the pressure cooker of their environment.

Girls of Paper and Fire is a great beginning to a series. The world-building is intricate and interesting, and it turns the Chosen One as Rebellion Figurehead trope on its head. Although there is lots of serious content, it handles it well, and the physical relationship between Wren and Lei mirrors the intense emotional pressures they both face. If you like fantasy YA series, you could do worse than look here.