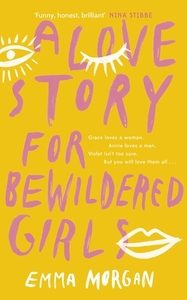 Sometimes you take a chance on a book, and it pays off in a weird, indefinable way. This is the only way I can describe my experience with A Love Story for Bewildered Girls by Emma Morgan. Actually, it turned me into the bewildered girl the book addresses in the title. I tacked it on to a book order after reading the tagline, an impulse purchase if there ever was one, and went in to reading knowing approximately nothing. That tempting tagline? “Grace loves a woman. Annie loves a man. Violet isn’t too sure. But you will love them all…”

Although I wasn’t exactly sold on the use of ellipses, it was enough to pique my interest. It turned out to be a 75% accurate summary of the book. Bewildered Girls is told through the perspective of three women, which are revealed to be intertwined in different ways: Grace, a lesbian psychologist who is unsatisfied with her love life; Annie, a high powered lawyer who has high expectations for the men she dates; and Violet, who has a string of unsuccessful sexual encounters with men behind her, and lives with crippling anxiety which she calls “the fear”. Each woman is fairly neurotic in her own way, but it is questionable to me whether this made her relatable, or even (as promised by that tagline) loveable.

This is the sort of book that doesn’t quite have a plotline–rather, it delves into the goings on of these three women and takes the reader along with them, offering slices of three lives which turn out to be more entangled than would be initially suggested. The book is written as a series of titled scenes rather than chapters, allowing the reader to dip in and out of perspectives quickly. It keeps the pace quick and engaging, which is good because to be honest, not much happens. I don’t mean that in a bad way, whatever it may seem–I personally enjoy books that are more character studies than anything else.

What plot there is focuses on the budding relationships with each of the women’s love interests. Grace meets a woman at a party and becomes, for lack of a better word, obsessed with her. Annie starts seeing a man who somehow manages to live up to the high standards of etiquette and personal grooming which she holds those in her life to. The biggest surprise is that Violet, on a reluctant night out, meets a woman and decides to sleep with her. This is the relationship which was the most interesting to me; it has ripple effects across the other two characters’ lives, and I would argue it is the central focus of the whole book. Given that Violet is so reluctant to label her mental illness in any tangible way, it is unsurprising that dating a woman doesn’t lead to any redefinition of her sexuality. It causes more of an upset for Annie, who is Violet’s overprotective roommate and can’t get her head around her friend dating a woman when she had previously dated men.

This was just one of the behaviours that made it really difficult for me to like any of the characters. Another block, for me, included Grace patently not listening to what the woman she is dating tells her about her wants and needs. When I say that I didn’t end up loving them all, as the tagline promised, this is what I mean: I enjoyed reading about them, and I was drawn in by their character voices and entertained by their lives, but for me they were fundamentally unlikable characters. I still think it’s a triumph of sorts for a book, to be full of characters the reader doesn’t like and still be something they are glad they read. Despite the attitudes and actions of the characters which I found to be irritating, the narrative voice was smooth and sometimes whimsical, with a strong sense of personality that was fundamentally charming. I did want things to turn out for the three women, even though I didn’t think any of them were particularly good people.

It could be said that Morgan allows her women to be messy, which is something I really appreciate about A Love Story for Bewildered Girls. The characters are definitely dimensional and complicated, as are the relationships between them. It is often funny, and also often annoying, but in a way that ultimately made me want to keep reading.