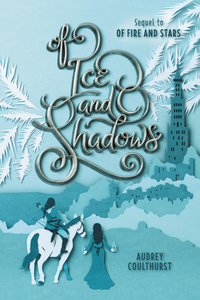 Of Ice and Shadows is Audrey Coulthurst’s sequel to Of Fire and Stars. I read the first book when it came out in 2016, excited for a lighthearted Disney-esque fantasy about two princesses falling in love, which is exactly what I got. When the second book released last August, I was excited to learn about what Denna and Mare did next.

I really loved Of Fire and Stars, and I might like Of Ice and Shadows even more. Both books are lighthearted fantasy, and they’re such good fun to read because I feel like they don’t take themselves too seriously. It’s so easy to just enjoy them for what they are. And really, who wouldn’t enjoy a story about two princesses in love?

After the events of the first book, Denna and Mare travel to Zumorda, a kingdom which embraces magic, hoping to find answers to Denna’s abilities and training to help her learn to control them. But when Mare receives a message from her brother, the king of Mynaria, he tells her of the increasing political turmoil in their kingdom, and asks her to act as an ambassador to Zumorda to build a political alliance. Meanwhile, Denna’s magical abilities are becoming more difficult to control. Both girls have to adapt and learn to use the gifts and talents they have, as they learn to live in this new world.

I found the politics of this second book easier to follow than the first. It was easy and clear to keep up with who wanted what and why. At the same time, there were still surprises waiting. I didn’t enjoy the court politics in Of Fire and Stars, and found them confusing and less interesting than the romance. But in Of Ice and Shadows, I was invested in the politics, and the political parts of the book were connected to the main characters. I loved it!

One of the most interesting things in this book was the development of a rift between Denna and Mare, largely fueled by Mare’s distrust and prejudice against magic, which is considered heresy in her own kingdom.

I wanted to lean over and kiss her. I wanted her arms around me, and her voice murmuring in my ear that everything would be all right. But the expression on her face and the way she’d put a little distance between us told me what I needed to know. My magic frightened her, and now that it was back in full force, she didn’t trust me.

It’s heartbreaking to see the girls at odds, and how much it hurts both of them as they try to work out the problems between them while maintaining both their values and their relationship. Although it is mildly frustrating for the reader to have the main couple experience these kinds of problems, I think it is very well done, and I enjoyed sympathizing with both Mare and Denna and watching their relationship change and develop.

Something that was a little more difficult to sympathize with was Mare’s long lasting prejudice against Zumordan culture and religion. She spends most of the book abrasively disliking things which are different from Mynaria, her own kingdom. I’ve lived in Japan as a foreigner for nearly three years, and while culture shock and adjustment can fuel this kind of prejudice and confusion, it isn’t a good look for anyone to stubbornly maintain the point of view that “my country is better than yours”. I would have liked to see Mare learn to appreciate that which is different, rather than reacting with hostility to things she didn’t understand. Things do improve at the end of the novel, though, and I still very much enjoyed this book.

If you read Of Fire and Stars and liked it, pick this up! Even if you had mixed feelings about the first book, give the series another shot, and try this one. Of Ice and Shadows is a quick and easy read with two princesses in love, and exactly the kind of lesbian fairy tale that I enjoy.

(Psst, according to a comment made by the author, if the second book gets enough good reception, there might be a third book to finish off Denna and Mare’s story. And I really want a third book, so please read Of Ice and Shadows!)