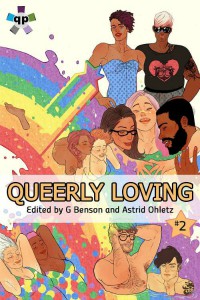 I’d like to recommend the YA dystopian short story “More than Anything” by Eden French, which kicks off Queer Pack’s Queerly Loving vol. 2. There are other stories about bi and lesbian women in the issue, but I’m not finished reading it yet and I didn’t want to wait til I finished the book before telling you about this great opener.

I don’t usually care for post-apocalyptic, dystopian, gritty settings, but French’s was written so approachably that I was sucked in immediately. Her teenage protagonist, Lexi, has the kind of self-sufficient grit and determination that made me feel like I was watching a younger, queerer Rey from the new Star Wars movies. Rey on Jakku, anyway – the Rey we see climbing around in broken ships looking for parts to sell.

Lexi is utterly adorable – there are creative details like her thinking claustrophobia meant fear of claws, which she’s eager to reassure the mutants she thinks their hands are neat! — and won’t let anything stand in her way. She lives in a world of violence between crime bosses and stolen drug stashes, but she has one goal in mind – getting testosterone for her best friend.

I’m not sure how to parse her identity because she brags about ‘getting the ladies’ (which could always be all talk but at least indicates an interest in women) but there’s also language on the final page, beautiful language, that implies she might be in love with said trans boy. On the other hand it could also be super intense, incredible platonic love.

I’m almost sorry this review is spoilery enough to ruin the experience of watching it unfold, because for several pages you see her sneaking into dangerous places and setting up a meeting with shadowy, ominous characters without knowing why. But it’s also important to me that people know lit like this is out there so sometimes spoilers become a necessary evil.

In any case I can think of many people who would love to see a queer teenage girl overcoming hardship and getting what she wants in a SFF setting, without facing any trace of either gendered violence or homophobia.

Shira Glassman’s next book comes out May 7! Have you preordered Cinnamon Blade: Knife in Shining Armor yet? If you like superhero f/f romance between a snarky badass and her favorite damsel-in-distress, check it out.