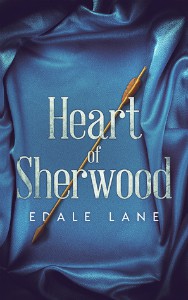 Another lesbian Robin Hood retelling has arrived on the scene of my favorite niche. Usually, my Kindle does a poor job making recommendations for me, but in this particular instance, it was absolutely correct in advertising this book to me. As a self-professed amateur Robin Hood scholar and enthusiast, anything that combines my favorite English myth with queer ladies is something that I will read. My congratulations to my Kindle for its successful marketing algorithm.

In Heart of Sherwood by Edale Lane, Robyn of Locksley flees into Sherwood Forest after the Sheriff of Nottingham wrongfully takes her family’s manor and lands for himself. Disguising herself as a boy, she joins an outlaw gang and soon leads them into a new charitable cause. Meanwhile, Marian is an agent and spy for Queen Eleanor, keeping an eye on the Sheriff and Prince John and their doings in Nottingham. Together, the two young women work to help the queen acquire the funds to pay King Richard’s ransom, and stand against those who would use the poor for their own benefit.

This book is fairly straightforward as far as Robin Hood retellings go. Which is to say that it doesn’t act like a prequel or stray too far from the basic premise of the traditional story preserved in popular imagination: Robyn and her band of outlaws rob from the rich and give to the poor, Maid Marian is Robyn’s lady love, their chief enemies are the Sheriff of Nottingham and Prince John, and they are staunchly supportive of King Richard the Lionheart. If anyone is looking for a traditional Robin Hood novel with lesbians, this one will probably satisfy.

While it is traditional, it also does some new and interesting things with the story. I particularly enjoyed how Marian acted as a political spy for Queen Eleanor. She definitely had her own agency and a role to play within the story. Not only did she help provide information as a spy, but she also had parts in the bigger moments of action. I liked that Marian was allowed to play a feminine role, while still being involved and important in the action and plot. Often in more recent Robin Hood retellings, Marian’s character tends to be cast into the “not like other girls” category so she can be “one of the boys” instead. While that isn’t always a bad thing, I definitely enjoyed a Marian who used her status and power as a woman to her own advantage and the advantage of her cause.

Robyn and Marian’s relationship moves quickly, and although I would have enjoyed a bit of build-up, I liked that they are established as lovers early in the story. It makes room for the more politically-minded plot to take its course without being too encumbered by the romance.

There were times that the writing didn’t feel very polished. Some run-on sentences were clunky enough to disrupt my reading flow, and the research often felt extremely one-note, without much depth. But in my years-long pursuit of a good lesbian Robin Hood retelling… I forgave it.

Speaking of research, historical anachronisms somewhat deterred the overall more historical feel of this book. Notably, during a scene where Catholic Mass is being said, the characters use the post-Vatican II English Mass. I was raised Catholic, so the call-and-response on the page was almost laughably echoed in my head in perfect cadence, even though I haven’t been to church in years. I did find it very odd though, that this scene used English, rather than Latin, as it would have been in this time period. It also felt odd that the scene took a few pages to go through the service step by step, describing each significant part, despite not having any obvious connection to the plot. It felt like I took a break from the story and went to church.

Later, in the book Robyn goes through the process of trying to find equilibrium between her Catholic faith and her relationship with Marian. I think having religious LGBTQ characters is definitely important, but I did not expect to find it in Heart of Sherwood, and perhaps that is why I found the scenes dealing with Robyn’s internal struggle with religion more of a distraction than anything else. Despite any of my own misgivings, I do think that it resulted in a very positive portrayal of someone who can both be gay and still feel valid and accepted in their chosen religion.