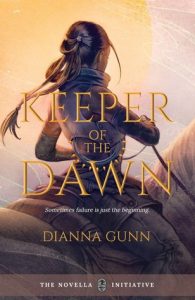 Lai has spent her entire life training to be a priestess for the gods, taking in her mother and grandmother’s steps. Yet, when her trials arrive, she finds herself rejected by the gods after a mysterious vision from her favourite goddess. Confused and lost, Lai makes the decision to leave the only home she has ever known, and venture out in search of her true fate.

Keeper of the Dawn is a novella with the plot of trilogy of novels. So much happens that if you get distracted for even a moment, you can lose your place in its chronology. Now, this allows for a quick read, but honestly, I would have preferred the story be longer. There is so much that goes unexplored that could have strengthened the story. Every aspect of the story is important, too, meaning that Gunn could not really afford to cut any of it. The problem was that, because it was a novella, a lot of what happened was condensed greatly, to the point where at times several years passed over the course of a paragraph.

The length also affected the characterization of essentially every character, but Lai, the protagonist, in particular. By the end of the story, I felt like I barely knew her outside of her devotion to her religion and her ancestry. Because of this, I found it difficult to become invested in her and in the relationships she formed, especially the romantic relationship she enters about half-way through the novel. I would have loved to learn more about Lai and about her motivations. As it is, her desires seem shallow, and I am unsure if she really felt a connection to her goddesses outside of the fact that her mother and grandmother were strongly devoted.

Something I did not realize when I began this novel is that it includes an asexual character! Which was quite a pleasant surprise, even if I’m not entirely sure if I’m comfortable with the way it was handled (before she admits her lack of desire for sex, she is questioned by her girlfriend about what “normal couples” do in bed. The use of the word “normal” to describe a sexual relationship felt a bit off for me). I would not advertise this as an asexual novel, however, as I feel that anybody reading it exclusively for asexual representation will feel let down.

Although not as developed as I would have liked, the relationship between Lai and her love interest, Tara, is quite sweet. It provides several nice scenes, and is a necessary reprieve from the action within the novella.

A few short warnings about this novel is that it isn’t explicitly racially diverse, so while technically you could assume all the characters are of different ethnicities, it is most likely that Gunn wrote them all to be white. There are non-explicit mentions of dangerous levels of homophobia, but these mentions are brief. There is also some fatphobic implications, in that there are only two characters throughout the entire novella who are described as fat, and both are villains. As well, there is quite a large amount of violence throughout.

Overall, Keeper of the Dawn was an enjoyable story. The only true complaints that I have can all be reduced to the length of the story, which was far too short for the amount of plot that Gunn included. I would still recommend it to any lovers of fantasy, though, especially those looking for fantasy with a queer female protagonist.