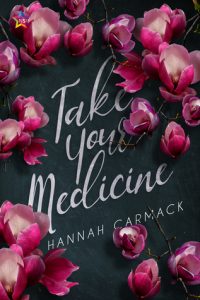 I first heard of Hannah Carmack’s new book, Take Your Medicine, when I was browsing Nine Star Press’ upcoming books. The cover of Carmack’s book was gorgeous (fancy script and lovely pink roses – totally up my alley) so I took a chance and clicked on it. After reading the synopsis, my jaw dropped. Not because the description was appalling or anything, but because the main character, Al, has a condition very similar to one I also have. Al has vasovagal syncope, which I actually used to be diagnosed with. I’ve since been diagnosed with postural orthostatic tachycardia syndrome (POTS). The symptoms and treatments are essentially the same, but the triggers are different. Never in my life have I come across a character that went through the same struggle I do on a daily basis.

I began reading the book the second I got my hands on it. Not only was it incredibly validating to be able to see yourself in fiction, but it also makes you feel much less alone, like your illness matters. Only around a hundred pages, Take Your Medicine didn’t take me very long to get through and is a great way to spend a few hours of downtime.

The story is about a teenager girl named Alice Liddell, Al for short, and is a retelling of Alice in Wonderland. This isn’t the Alice in Wonderland you’re used to, but a southern gothic retelling in which Alice is black, chronically ill, and just discovering she might not be as straight as she once thought.

Beloved characters from the classic novel appear, including the Queen of Hearts who is Al’s mom and a cardiothoracic surgeon, hellbent of trying to find a cure for her sick daughter. After a chance encounter with Rabbit and Kat, Al takes to rebelling against her mom in the hopes that Rabbit and Kat, two teenage witches, might be able to help cure her. Friendship ensues and Al eventually falls for Rabbit, the quieter of the two girls. Something happens that brings realization to several of the characters, and the story wraps up.

I think the book may have benefited from being a bit longer and getting to see more of the relationship develop between Al and Rabbit. The books strengths really lie in the relationship between Al and her mother, Al’s descriptions of her illness, and the fun cast of characters. While I thought Rabbit was sweet and really liked her, I really loved Kat kind of wanted the three girls to have a polyamorous relationship together.

If you like books that features chronically ill characters (written by a chronically ill author!), southern gothic lit, sweet romances, and well-written mother-daughter relationships, then I recommend giving Take Your Medicine a try. In fact, I recommend it anyway!