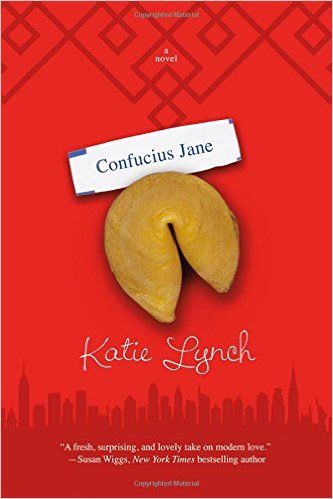 Warning: This novel may induce drooling! Produces a Pavlovian response to descriptions of Chinese cuisine. A platter of deliciousness is advised to have on hand while reading.

Confucius Jane is a wonderful treat. After the emotionally heavy drama-rama of The Walking Dead and Game of Thrones, it was nice to slip into a world that’s comfy and welcoming, but also dotted with imperfections.

We meet our protagonists, Jane and Sutton, at a crossroads in their lives. New York City’s Chinatown and Upper East Side provide colorful and staid backdrops to the tale. There is also plenty of awkward Will-I-Won’t-I romance dancing between the two women. It’s a great mix of drama, humor, and food for thought.

Jane is the kind of woman who never needs a coat, plucks poetry from the air, and seems to have hidden wells of confidence in reserve. Under the surface, however, lies a thick layer of uncertainty. It’s one thing to offer pat advice and ambiguous futures to strangers she’ll never meet, via the slips of paper inside each fortune cookie. It’s quite another for Jane to divine what step to take next following her early departure from college. She spends her afternoons in an office above her aunt’s and uncle’s fortune cookie company, penning pithy prognostications and furtively watching “The Goddess in Glasses” eat at the Noodle Treasure — a woman she will come to know as Sutton St. James.

Sutton is a swirling mix of scientific passions and career drive, with no time for love. She struggles to balance her parents’ expectations for surface perfection and strict adherence to their moral code. Her father, a former US Surgeon General, known as “America’s Doctor”, pressures his daughter to follow in his footsteps. Neither of her parents wants her to find love with a woman. Despite her sacrifices of time and emotional energy, she ends up giving more to her parents and their world, than she receives in return from them.

Kate Lynch peoples this world with charming and frustrating characters. The supporting cast provides just the right amount of seasoning to give Confucius Jane full flavor. Min, Jane’s precocious eleven-year-old cousin, pokes and prods the love lives of her family and friends. She even Googles pick-up lines for Jane to use on Sutton before she works up the nerve to approach her. It’s adorable and hilarious when she reads them aloud to Jane. Sue, an older woman who runs a Chinese apothecary and astrology shop in the neighborhood, offers encouragement and support for Jane, and later for Sutton, as well.

“Sue made [Jane] feel part of the fabric of the community instead of a frayed thread barely dangling from the edge. That sense of never quite belonging came with the territory of being hapa.”

Hapa relates to Jane’s biracial heritage and also to her globetrotting formative years. The author explores the idea of existing in halves across cultures. It’s an interesting idea to chew on, this need to categorize people and things as either one thing or the other. In the supplemental “Author Interview”, Kate Lynch discusses Hapa further, relating it to lesbians:

“LGBTQ-identified people are socially hapa by virtue of our sexuality; we stand at the intersection of multiple communities, endeavoring to make a space for ourselves in all of them.”

The bonus Author Interview and Discussion Questions are great supplements to the story.

April is National Poetry Month. Like Jane, you can find poetry wherever you go. If you’re interested in exploring her way of weaving words together, it’s pretty easy to do. Find a space to sit with a pen and paper and listen to the flow of words as the fragments float past. After your outing, read through the lines of conversation you caught and select the ones that speak to you. Arrange them into a poem. You can learn more about other ways in which “Found Poetry” transforms text (menus, advertisements, lists, etc.) at Poets.org and at foundpoetryreview.com