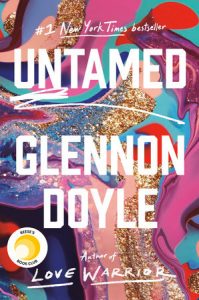 I was skeptical about this book. Remember back in May 2020 when nearly the entire bestseller list was taken up by anti-racist titles such as How To Be An Anti-Racist, Me & White Supremacy, and My Grandmother’s Hands? Untamed was also on there, and I felt skeptical about a white woman’s voice being amplified so loudly during such a critical time. I knew it was a memoir, but someone told me it also addressed her personal journey with her own whiteness and coming to an anti-racist identity.

I was disappointed to see so little of that in the book, but that’s not Glennon’s fault — I had bad information. It does have a little bit about it, but it’s just one medium-length essay among dozens of others — not even a major theme, really.

I was skeptical because I knew who Glennon Doyle was: a white, feminine woman with a conservative Christian background who fell in love with a (famous, queer) woman (soccer player Abby Wombach — who also wrote a book, Wolfpack) and left her husband. I knew she had quite the social media following, and my impression was that she was in that category of inspirational speakers and motivational self-help that is usually geared toward white wealthy mainstream women, and of which I tend to be very critical for the ways it reinforces capitalism, hegemony, beauty standards, and even patriarchy.

I struggled to relate to a lot of her work because she is so mainstream. I have been out as butch and queer since 1999 — more than half my life now — and my entire adult understanding of myself comes from counter culture, activism, being critical of the overculture, and and being very actively against indoctrination. I not only came out into counter culture, I grew up in it, outside of the contiguous US, and have never had a mainstream US world view. So when she describes her process of expanding and transforming outside of her mainstream world view, I applaud her — but parts of it are not all that radical or even all that interesting to me. Those things seem kind of like a baseline, not a revelation.

What was really interesting — fascinating, moving, and even inspiring — was the ways she describes that transformative process.

I am so impressed and have much respect for her process in general, and how much she had to trust herself in order to re-build her life, going against almost everything she’d known. So many of the short essays that make up this book are about how she trusts herself, the personal process of naming her inner Knowing, the consequences, the social expectations of placing trust somewhere outside of one’s self in order to know what’s right.

The major takeaway for me was about the cost and construction of abandoning one’s self. I know from early childhood development theory that our attachment styles, and sometimes relational trauma, are wrapped up in how we abandon ourselves to seek outside approval. For some of us, we have a pattern of others overriding what we know to be true and right for ourselves, and that often, for me personally, when resentment brews and gets directed at others, it is a clue that I have not been being true to myself at some deep level.

I am surprised to be so moved by this book. If you like personal transformative reflections, parenting, spiritual seekers, truth seekers, you may enjoy this book. I found it very easy to read and digest, with many profound moments.