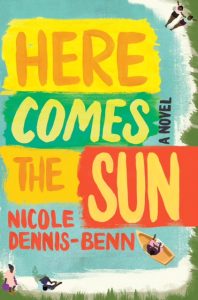 Some minor spoilers toward the end!

Nicole Dennis-Benn delivers a heart wrenching gut punch with Here Comes the Sun. The story follows two sisters as they contend with the effects of colonialism in Jamaica and the intergenerational trauma caused by that violence. Their relationships with each other, their love interests, their mother, and everyone in between are informed by the lasting influence of continued colonization.

I listened to the audiobook narrated by Bahni Turpin, which I absolutely recommend. She captured the melodic cadence of Benn’s prose with incredible precision, bringing each character to life with their own unique voices. That marriage of Benn’s narrative with Turpin’s voice acting created the perfect recipe for an immersive read.

Benn deftly intertwines various themes of colorism, trauma, sex work, sexual assault, and homophobia, all through the lens of the ramifications of patriarchal, white colonialism. By focusing on the main characters’ relationships with the supporting characters, she makes it clear that none of these issues exist in a vacuum. Everything is informed by the damage done by racism and colonization.

You can’t talk about one plot or character arc without talking about the others. That’s the brilliance of Here Comes the Sun. Margot regards her younger sister Thandi as an innocent girl to protect from the cruelties their mother put her, Margot, through. Thandi wrestles with a hatred of her skin color, as she’s been taught that her darkness is ugly and undesirable.

“No one gon’ love a black girl. Not even herself.”

Thandi and Margot’s mother’s words hit hard, reflecting the scars she’s endured from the violence of white men. It’s a moment that makes you understand Dolores’ hard exterior and lack of empathy for anyone, including her daughters. But it never excuses her behavior and actions.

At the same time, both sisters resent one another. Margot resents Thandi for having opportunities she didn’t have and throwing them away, in her opinion. Thandi resents Margot for putting the pressures of success and getting out of poverty on her at the expense of her dreams and personal desires.

All the while, Margot protects Thandi from their mother’s propensity for selling her daughter into sex work. Thandi doesn’t have a clue of their mother’s cruelty until the very end, where she finally understands why her sister Margot is the way she is. But this doesn’t let Margot off the hook for the damage she inflicts.

Dennis-Benn’s narrative shines a light on how a victim can also become a victimizer. The characters are messy and complex. It makes it hard to hate any of them, but you won’t necessarily love any of them either.

Readers looking for a happy ending to a lesbian relationship will not find anything of the sort here. Margot uses Verdeen as an escape from the lack of love from her mother. But she is also willing to sacrifice Verdeen for a sense of freedom from the prison the town’s atmosphere creates for her. While Verdeen endures ostracization and violence for being the town “aberration” to stay with Margot, Margot is willing to throw her under the bus.

The best way to summarize Here Comes the Sun is messy and complex. It’s tough content, but Dennis-Benn’s writing is so adept you cannot help but race through the story.