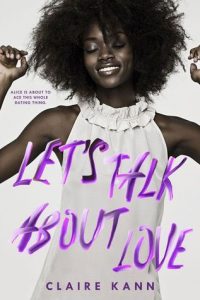 I have a lot of mixed feelings about this one. Initially, I was really excited to pick it up! A black, biromantic, asexual main character in a YA romance? That is definitely not an intersection often explored. I was looking forward to something fun and fairly light, and initially, I thought that was what I was getting. Alice is an adorable main character. She’s still mostly closeted as asexual, but she’s done a lot of thinking about it. She’s developed a Cutie Scale, which basically measures her aesthetic attraction–not just to people, but to all kind of cute things. (Alice is obsessed with cute.)

I loved Feenie–the grouch–immediately. She hates everyone but her boyfriend (Ryan) and Alice. The three of them live together, and form a tight-knit family. Feenie has always been fiercely protective of Alice, including punching a girl in the face in high school who made fun of Alice for being asexual. She’s rough around the edges, but I was invested in their little family. And–initially–I really liked Takumi as well. He almost seemed too perfect (which they flat-out say in text). It was a promising beginning! But… little irritations started to add up.

They didn’t seem major at first. For example, Alice works at the library, but doesn’t seem to care about it or enjoy it that much. She’s constantly off in a corner with Takumi, not working. Her boss also doesn’t like being a librarian. This is a very minor point, but it was puzzling to me: librarianship is a highly competitive field that doesn’t pay well. How would people who are indifferent to it get in and keep these jobs? And then there were some weird class moments, but that’s eventually addressed (Alice keeps saying that she’s poor and her parents are rich, but that’s not really what being poor is. Alice has a safety net, even if it comes with restrictions she doesn’t want. She equates the idea of being cut off from their money as being disowned.)

Her family is also… Well, they seem realistically complicated, but I can see how Alice was constantly stressing about it. She’s the youngest sibling by decades, and everyone seems to be determined to make her decisions for her. Her mother, especially, insists that she has to go to law school or she’s throwing away her future. Every time she does anything that her mother doesn’t approve of, all of her older siblings call and text constantly to criticize her. There is love there, but it had me stressed out just reading about it.

Soon, even the aspects I was enjoying started to fizzle out (or explode). Feenie went from gruff-but-lovable to downright shitty. Feenie and Ryan are engaged, and although the three of them are theoretically a unit, Alice is often the third wheel. Which is fine, until Alice starts going off with Takumi and Feenie goes into a rage over it. Both Feenie and Ryan seem to expect Alice to constantly be available to them, though that’s not equally true of them.

Spoilers follow for the rest of this review, because I have Thoughts.

When Feenie and Alice finally discuss what’s come between them, it turns into Alice calling herself an asshole and saying she’s been selfish, which is… not what I had been seeing. Although they form a shaky truth, it didn’t feel resolved for me. Feenie stopped being a favourite and instead felt like a toxic, possessive relationship.

And speaking of relationships! I was into Takumi at first because, as stated, he seemed pretty much perfect. Which meant the ending gave me whiplash. On reflection, I realized that I felt like there was no middle to the book. Alice and Takumi get closer and closer, without any real conflict between them until the end. They basically seem to already be dating. So it was a shock to me that when Alice finally (finally) actually asks him out, he spouts off the same ignorant things that we’ve already heard from her previous ex. Takumi–who knew Alice was asexual, who had seemed supportive–says that if she really loved him, she would let him have sex with her. Which is appalling to me. Why would you ever want to have sex with someone who didn’t want to be there? I can understand him saying “I don’t think I could give up sex.” But that was terrible to read. I actually found my eyes skimming over his whole speech, because I couldn’t understand why Alice was going through this again, when it had already happened in the beginning of the book. He did later sort of take it back, but to me, the damage was done. I no longer saw it as a happily ever after, because I didn’t like Takumi anymore.

I did read a review of an earlier draft of this book that clarified some things for me. Apparently in earlier drafts, Takumi was not a saint. In fact, he was downright skeezy at points. And that explains why I felt like there was no middle to the book: originally, it was a push and pull between Takumi and Alice, with Takumi pressuring Alice into things she wasn’t comfortable with. Understandably, that was criticized, and most of that was removed, but that puts the ending in context, as well as their lack of conflict in the middle of the book.

I’m disappointed, because I was really enjoying the read for the first 3/4 of the book, even with the minor issues I had with it, but the ending left my unsatisfied. Takumi went from eerily perfect to (in my eyes) irredeemable on a dime. Alice’s relationships with her family–both by birth and chosen–were still strained. It was far from the fluffy, uplifting ending I was expecting, though I know it was supposed to be a HEA.

I know other people really enjoyed this book, and I can see why. But it left me stressed and sad, which I don’t think was the intention.