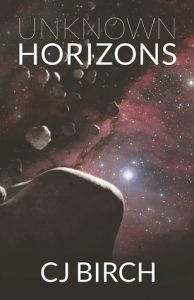 Unknown Horizons follows lieutenant Alison Ash as she boards the Persephone, a ship slated to join a generation ship on the 100 year journey to a new planet. Ash, as she prefers to be called, quickly find herself attracted to the young Captain Jordan who may return the attraction Ash feels. However, Ash’s past and her lost memories catch up with her and jeopardize the entire mission.
The characters and story were engaging and well-written. I couldn’t put the book down, but there were several peeves that this book raised for me.
Firstly, the book is written in first person present tense, which was jarring. Once reading for awhile, it no longer bothered me, but coming back to the book after a time away still resulted in being jarred. And while first person present tense is often hard to maintain, I think that C. J. Birch did it successfully and it did add some urgency to the plot that past tense may not have been able to express.
Secondly, rather than trying to catch your interest by starting at the beginning of the plot, Unknown Horizons‘s first scene is pulled directly from the climax in a flashforward. As the scene reaches it’s climax, it cuts away and starts into the plot proper, four weeks earlier. This is one of my least favourite tools, and while I have seen it many times in television, this is the first time that I have seen it in a literary context.
Thirdly, and finally, there is the fact that the book never truly reached it’s climax as the main character passes out at the climactic moment and the book ends.
This book had a huge climatic let down. I understand wanting to leave a cliff hanger, but this went way beyond that. You cannot take the pivotal moment, the moment that the entire book has been leading up to, the moment that actually started the entire book and just end it with the main character passing out. This scene started the entire book, so you would think that the story would continue past that point, but it in this case it did not.
I would still recommend Unknown Horizons as it was a quick and engaging read. But, if there will be a sequel I would wait for that to come out first.