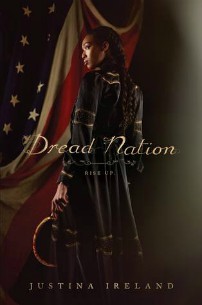 Dread Nation by Justina Ireland is one of those rare books where an interesting concept is upheld through thorough world-building and great writing. It posits “What would happen if the zombie apocalypse happened at the end of the Civil War?” and follows through with that idea – building an amazingly detailed post-war, post-undead world and filling it with political conspiracies, combat schools, small life details, and plenty of drama.

The story follows Jane McKeene, a student at one of the most prestigious combat schools for black girls in the Baltimore area. She is training to be an attendant, a highly skilled position that is meant to protect the life and virtue of wealthy white women, but Jane has her own plans to return to the plantation where she was born, which is now being run by her mother. Before she can graduate and strike out for home, however, she is caught up in a series of events that takes her out of Baltimore and to the Kansas prairie town of Summerland. Stranded there with her fellow school-mate Katherine, Jane discovered that the torturous living conditions of Summerland cover up even worse problems coming for the inhabitants.

What I really liked most about this book was the care that was put into creating the world and the atmosphere of the book. It’s not logical to plop down zombies into the Civil War and keep everything else the same, but the author carefully layered her story with details about how life would play out, right down to acceptable skirt lengths and Jane’s utter shock at seeing real horses in Summerland. It’s the sort of world-building that I love to immerse myself in. Please, tell me more about the history of combat schools, how zombie fighting techniques evolved, and the effect of the undead on post-Civil War life. Add to that the weird cult-like atmosphere in Summerland, and you have an engaging and evolving read that really fleshes out the premise of a historical zombie apocalypse. There’s also plenty of straight-up zombie fighting included too, for a nice balance of action and plot-building. Jane is an extremely capable person who is absolutely deadly with her zombie-fighting scythes. A child of her time, she doesn’t waste time on the nostalgia of those older than her, who long to go back to the way things were before the undead rose up. Zombies and post-war politics are simply a fact of life for her, and she switches back and forth between doing what she needs to survive zombies and doing what she needs to survive white society, although her strong independent streak does get her in trouble a lot.

Another thing I liked about this book was how quietly, and normally, queerness crept into it. At first, Jane shows both that she has been involved with Jackson Keats, a local boy, and an appreciation for Mr. Redfern, a trained fighter who works for the Mayor. Later though, she reveals that she has had relationships with girls in the past, and it was, in fact, a girl who taught her how to kiss. I really enjoy that this information is revealed so casually, and that Jane herself is very casual about it. At once her sexuality is a real and explicit part of her character and not a guiding part of the plot at all. I guess that fighting zombies means that she does not have time to worry about who she wants to be with, or perhaps she came to terms with herself with her first girlfriend. Either way, Jane McKeene does what she wants, whether that’s fighting zombies or kissing girls, and it was nice to have it be such a nonissue for a historical character. Kate, on the other hand, is outwardly bossy but intensely private about her personal life. Even when she and Jane grow closer through their shared struggles, she doesn’t like to talk about her past. Finally though, she confesses to Jane that she isn’t interested in sex or marriage. This happens towards the end of the book, so there isn’t time to develop this more, but I was genuinely excited for ace rep, and I really appreciated the antagonists-to-friends arc that her and Jane went through.