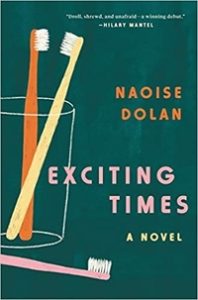 In the bookish community, there is a divide between people who are character readers versus plot readers. Character readers need to read detailed, nuanced characters, while plot readers focus on an interesting, intricate plot. For the longest time, I thought I was a character reader. I’ve read plenty of books where the plot takes a backseat to a character’s journey of self-discovery and really enjoyed them. Exciting Times by Naoise Dolan made me really rethink this aspect of my reading life, and I now know that I actually do need even just a little bit of a plot in order for a book to keep my attention.

Exciting Times is the story of Ava, an Irish twentysomething who moves to Hong Kong to teach English. While she’s there, she becomes entangled with a rich, aloof, English banker named Julian and, later, a vibrant, interesting lawyer from Hong Kong named Edith. The book deals with her differing relationships with both of them, and Ava trying to figure her life out. Aside from that, there is not much of a plot. It’s definitely a character-driven book.

Even that description I just gave reveals why this book fell a little flat for me. To me, it seemed that Ava was so clearly happier with Edith, who actually cared about her and called her out on her self-sabotage. This fact made it hard to understand the choices she was making to continually go back to Julian, who was so cold to her but offered her financial security. I wish that there had been more of an external conflict that would force Ava to really confront her dilemma and choose one or the other. Without it, in my opinion, the book basically became Ava’s internal monologue, which made it drag in the middle. This story structure also made the ending feel kind of rushed. I had a hard time understanding why Ava made the choices she made.

With that, there was also plenty to like about this novel. I can’t speak to the Asian representation in this book, but to me, Edith was a very interesting and compelling character, albeit less so seeing her through Ava’s eyes. I wish we had gotten more time with her and learned more about who she is outside of her relationship with Ava. I also really enjoyed how the book played with language. Ava’s English lessons were weaved through the writing in a really unique way. The voice of the book felt very raw and honest, and that’s what kept me reading even through the parts I found a little tedious. The setting of Hong Kong was also utilized very well, in my opinion, and made the book’s imagery feel vivid and interesting.

I saw a lot of comparisons between Naoise Dolan’s and Sally Rooney’s writing when reading reviews of this book and I can understand that. For me personally, Rooney’s books worked in a way that this one didn’t quite achieve. That being said, I enjoyed Exciting Times although it wasn’t quite my cup of tea and the ending frustrated me. I am always glad to see more queer representation from Irish authors and characters, though, and would encourage you to pick it up and see for yourself.