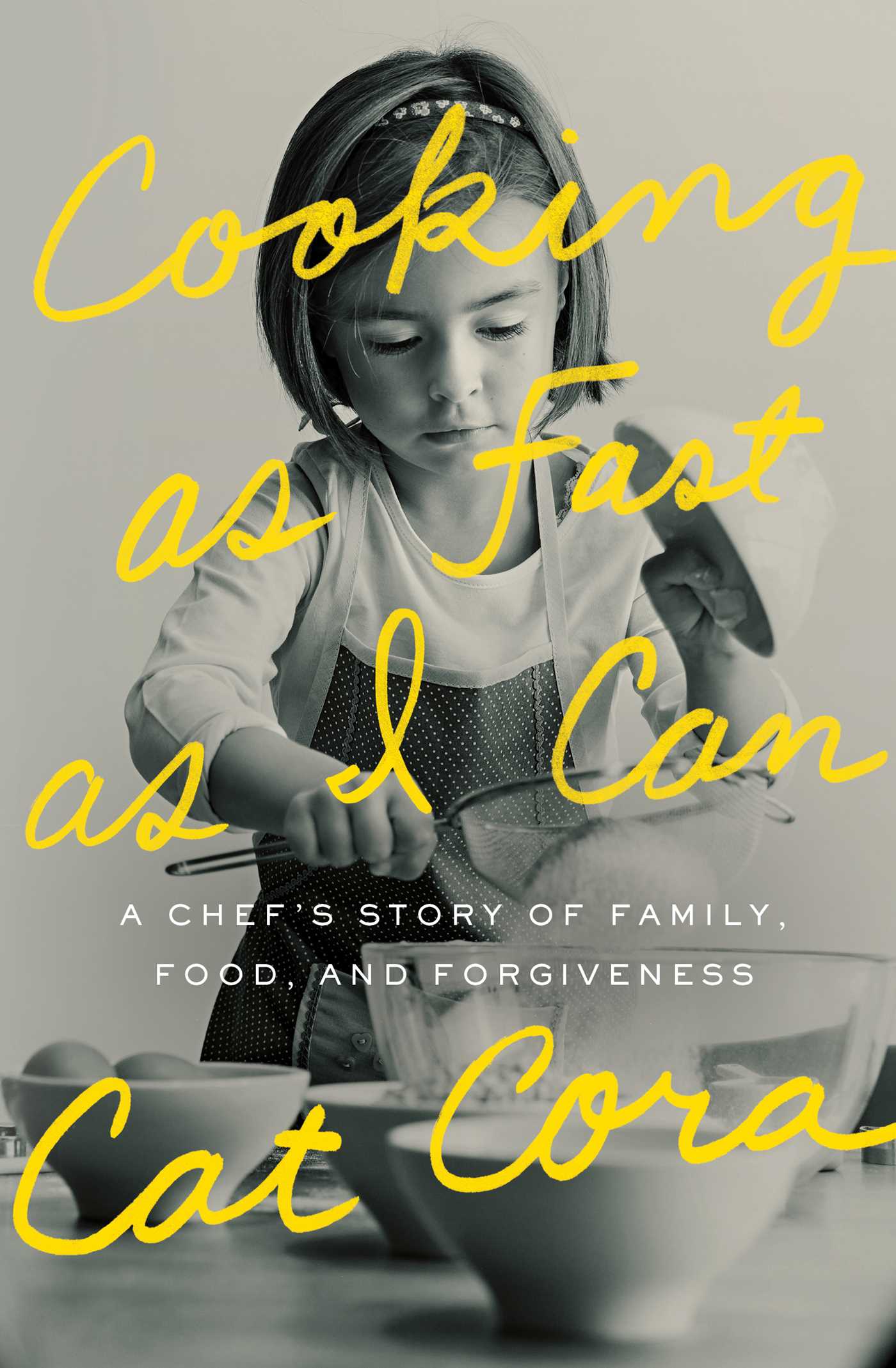 For years, I’ve admired Cat Cora for her ability to take on the most notable male chefs of the day, all the while prepared with a quip in her Southern twang and sporting a smile that invariably brings me to my knees. Self-assured and deservedly so, Ms. Cora’s star had risen in the midst of Food Network’s extended heyday. Her commanding presence and newfound celebrity status offered an image of infallibility as well as culinary brilliance. Watching her throw down in Iron Chef’s Kitchen Stadium, there appeared not a chink in her armor.

When I opened to the first page of Cooking as Fast as I Can: A Chef’s Story of Family, Food, and Forgiveness, I expected a tidy yet endearing memoir, one that might recount a few challenges along the journey toward hard-earned culinary stardom. A work that would enhance her accessibility while painting a portrait of a woman who has let nothing get in her way. Yet, I was unprepared for the uncompromising honesty and no-holds-barred self-reflection that I encountered within its pages.

Born to an unwed teenage mother on April 3rd of 1967, Cat, initially named Melanie, landed in the Mississippi Children’s Home, where she was adopted by a loving couple one week later. Virginia Lee and Spiro Cora of Jackson, Mississippi provided her with a rather idyllic childhood, complete with strong familial bonds, Greek and Southern culinary histories and frequent family outings.

For the young Cat, however, some of the family’s travels were tainted by the sexual abuse perpetuated by AH, the son of a family friend, nine years older than herself, who had made a habit of molesting her from the time she was six years old, warning her not to tell her parents or they would hate her, stop loving her and think she’s “cheap trash.” Fortunately, or not so much, when Cat was ten or perhaps eleven years old, her father walked into the bathroom where AH had cornered and proceeded to have his way with her. Initially relieved that the secret was out, Cat grew heartbroken upon witnessing the disgust on her father’s face. Rather than having AH’s hide, Spiro Cora turned and walked out, leaving her alone with her perpetrator.

There is very little of the polite or demure within Ms. Cora’s narrative. She tells things as they were (and currently are) without sugar-coating or diminishing the gravity of any given situation. Her tone is intensely conversational throughout the book, bare-bones honest without a hint of the melodramatic. She even throws in an f-bomb or two, which I appreciated to no end. Within her memoir, there is no denying it, Cat Cora gets real.

Not once does Ms. Cora shy away from her appreciation for the ladies, the strength and vitality of her apparently impressive libido or an admission of the trysts enjoyed while in a steady relationship. Seemingly unconcerned with the potential of judgements passed, Ms. Cora tells it as she sees and, yes, lived it.

When it comes to present-day dynamics, Ms. Cora remains forthcoming in her remembrances regarding events that pertain to her life with her wife, Jennifer, and their four young boys. She tackles head-on the challenges of motherhood, the residue created by several jet-set years as a celebrity chef as well as the fallout from her excessive alcohol consumption, which is truly where the rubber meets the road and I found myself most astounded by her willingness to self-disclose.

Even in conclusion, Ms. Cora chooses not to flaunt her involvement in twelve-step meetings as resolution in her relationship with alcohol nor as a happy ending to her marriage nor, for that matter, any other aspect of her life. She simply invites us to meet her where she stands, preparing dinner for friends while her wife is away, practicing yoga, and the boys play underfoot.