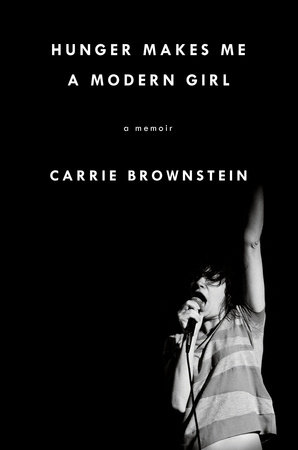 As a long-time Sleater-Kinney fan and a Pacific Northwest transplant, I was thrilled that Carrie Brownstein had written a memoir. I picked up a copy of Hunger Makes Me a Modern Girl right away and I’ve been telling everybody about it ever since. I’ve been recommending it right and left and I’m excited to tell you why.

Brownstein’s book is at times devastating, insightful, and hilarious. It traces Brownstein’s childhood in a Seattle suburb through her early days as a fan making music with friends and onto her life as a touring musician and briefly features her life during Sleater-Kinney’s long (and at the time, seemingly indefinite) hiatus. Though Brownstein explores coming of age under the shadow of mother’s eating disorder and her father’s later-in-life coming out, the bulk of the book is devoted to her time in Sleater-Kinney.

This means that you’ll find out a lot about the miseries of touring in general and Brownstein’s variety of on-tour ailments in particular, including a torn ligament, a surprise food allergy that made her face swell up, and shingles. Brownstein deftly deflates any rock star mystique we may have projected on the incredible musician. Readers are treated to other tidbits about the band as well, including backstories to some songs, bands they toured with, and where and how they recorded.

Brownstein also shares some of the incredibly sexist media coverage Sleater-Kinney has gotten over the years. She exposes her still-raw pain of being outed, along with fellow band co-founder Corin Tucker, by a reporter from Spin. The report had never spoken with either woman about their sexuality or personal relationships and Brownstein was stunned when she learned of the article’s content. In her early twenties at the time and not out to her family, and not completely clear how she wanted to identify, the experience clearly hurt Brownstein deeply, made worse by the reporter’s portrait of her as Tucker’s gushing fan rather than a competent and creative musician in her own right.

Perhaps these negative media experiences help explain the one aspect of the book I found wanting: Brownstein’s guardedness around her personal relationships, especially about her relationship with Tucker. Tucker and Brownstein were dating when they formed the band and recorded its first albums. Though Brownstein writes about the break-up and the impact it had on the music–more than one song on the album Dig Me Out deals the fall out from their relationship–she doesn’t let readers know much about the relationship itself. Their connection is described somewhat ambiguously until their breakup, which is confusing and mutes its emotional impact on readers. Brownstein tells of the sometimes-difficult relationship she and bandmembers Tucker and Janet Weiss have had with one another over the years (the band briefly went to couple’s therapy lead by a pair of married lesbians), but you can’t help but feel a piece of the puzzle is missing. Obviously, staying a creative partnership with her ex brought challenges, especially as Tucker got into a new relationship, married, and became a parent while Brownstein got sick on tour, had a series of girlfriends, and considered going to grad school. As Sleater-Kinney is an active band with a new album to promote, it’s equally obvious why Brownstein seems a bit protective. Spilling every emotionally gory detail wouldn’t be good for the band that’s finally making music together again. Besides, Brownstein is open about her tendency to live in her head and intellectualize her experiences. It doesn’t mean it’s not disappointing as a reader though. When later in the book Brownstein paints a heartbreaking and horrific scene around losing her cat, I wished she’d tackled her personal relationships with people as intensely and vividly.

That being said, the book is great. This memoir turns the idea of a rock star on its head. Brownstein is an unabashed geek and a serious nonfiction writer, as well as an excellent guitar player and singer. She takes her music seriously, cares about giving a good show, and spent most of her career acting as her own roadie. Being on tour isn’t billed as glamorous or sexy or filled with groupies. When Brownstein breaks down before a show and sets in motion a hiatus that will last over a decade, I empathized. The band was hard work.

Those who know Brownstein only from Portlandia might be disappointed, as the show only gets a shout-out in a single sentence. On the other hand, the ideas the show explores pop up periodically in the book. More importantly, it’s a waste to only know Brownstein from her acting. She an amazing musician and a great writer. I highly recommend this book.