C.L. Clark’s The Unbroken is a gripping novel of empire and revolution, set in the fantasy country Qazāl, which has been colonized by the empire of Balladaire. Filled with complex world-building, magic, and betrayal, it follows the soldier Touraine, born in Qazāl and stolen as a child to serve in the Balladairan military, and Luca, the Balladairan princess who is plotting against the uncle who has stolen her throne.  This is not a light read, by any means.  Violent and unflinching, it examines the real nitty-gritty of revolution from the sides of both the rebels and the colonizers.

Touraine’s perspective is particularly hard to read, as she goes from desperately trying to prove herself as an asset to the Balladairan army that will never see her as more than a Qazāli to joining the revolution trying to take it down.  Luca’s perspective, too, shows the ugliness of colonization, this time through her own character.  While Touraine comes face to face with the realization and wrestles with her own relationship to it constantly, Luca never quite seems to get it, which makes her perspective a good deal more frustrating to be in.  Everyone in this story does terrible things of varying levels, but there is a coldness to the way Luca does it that I struggled with more than I usually do with Mean Female Characters.  Of course, as this is only book one of an eventual trilogy, there is still time for her to grow.

The fact that I enjoyed this book as much as I did is, quite frankly, a little bit shocking, considering I don’t tend to enjoy gritty military/politics-focused stories, but I really did. It was incredibly smart and well-written (the similes in particular made me pause every time to just appreciate how evocative they were), and it kept me invested the whole time. Likewise, while I did not always like the characters, I found them and their relationships complex and compelling at all turns. I particularly enjoyed the moments with the other soldiers Touraine grew up with.

I think the reason I actively enjoyed this book beyond simply appreciating its many technical strengths is that, though it is gritty and realistic and sometimes difficult to read, it is never grim, or at least not for very long. This book, like its characters, has fire that keeps it moving, rather than simply lingering in the awful unfairness of everything. As dark as it gets, it leaves the reader still feeling like there is a point, like putting up a fight might actually take you somewhere.

My one criticism, if you consider it one, is that I did not care for the relationship, if you can call it that, between Touraine and Luca. I saw no reason for Touraine to like her, or even evidence that she actually did, considering Luca never seemed to actually respect Touraine as a person. I think this was intentional, in which case my complaint is simply a matter of personal preference rather than actual criticism of the book itself, but considering the note the book ends on, that left me feeling a little weird. But as I am not a person who enjoys reading about toxic relationships, you can take that with a grain of salt.

Overall, though, I was very impressed with this book for being not only well-crafted but actually enjoyable. Though it never flinches away from the harsh reality within it, the passion and humanity of its characters drives it on every page, leaving the readers with a fire that will stay with them long after the story ends. 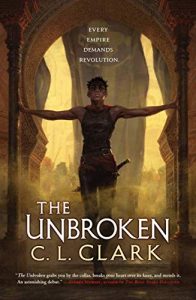 This is a thought-provoking, complex book that I’m still mulling over. The Unbroken is a military fantasy about a colonial occupation. It’s based on French on occupation of North Africa, though it’s not–of course–an exact match. There isn’t a lot of sexism in this world: women serve alongside men at all ranks in the military, and they also lead the revolution. It also doesn’t seem to have heteronormativity. There are lots of same-sex couples, and none of them are treated any differently. Don’t let that mislead you, though: this is a brutal colonialist occupation, and while there may not be a lot of sexism or homophobia, racism is a foundational piece of this narrative. The Balladairians also view religion as “uncivilized” and have banned any practice of religion, whether in Balladaire or Qazāl.

Because this is military fantasy, it’s not surprising that this is grim and violent, including hangings and discussion of rape. I sometimes struggled with this novel because of how bleak it got–but that is also an unreasonable criticism of a book about colonialism. It is multi-faceted in its depiction of the realities of colonialism, looking at it from multiple angles. The two main characters are Luca, the Balladairian princess fighting to get her rightful throne that is being occupied by her uncle, and Touraine, a conscript (or “Sand,” pejoratively) who was taken from Qazāl as a child to be made into a Balladairian soldier. They are fascinating, deeply flawed, complicated characters who have a powerful bond despite spending 95% of the story apart. Luca, of course, looks at the occupation of Qazāl from the perspective of the powerful, and she wants to restore peace to prove to her uncle that she is ready to lead. Touraine wants to be a good soldier, to rise in the ranks far enough to be respected despite being a “Sand.” Both begin on the same side of this conflict, but as the novel goes on, we also see how Qazāl citizens see this occupation, and a rebellion is planned.

The most compelling and fraught aspect of The Unbroken, to me, are these two main characters. Luca is a Balladarian (white) bisexual disabled princess–her legs were injured in an accident and she walks with a cane. She wants Balladairian rule in Qazāl to be less violent–but she has no intention of pulling Balladaire out of Qazāl. She wants peace, but as a tool to gaining power. Touraine was taken by the empire when she was young and doesn’t remember her childhood home. Her cohort is the only one made up of “Sands,” and she is fiercely loyal to them. They are in a difficult situation: they’re not Balladarian enough to be trusted by their superiors, but the Qazāl citizens don’t trust them either. They’re always on the front lines, essentially used as cannon fodder, and they have no way to escape. Touraine and the other “Sands” soldiers do have ideological differences, though: Touraine wants to be treated as an equal, assimilated into Balladarian society, while Beau and others want to be free from them. She doesn’t recognize that working hard to become a lieutenant hasn’t saved her from racist disrespect and threats, and that she won’t be able to pull herself up by her bootstraps out of systemic oppression. When they arrive in Qazāl, she hears rumors about her mother being there, but she has no desire to meet her. She thinks of the Qazāl citizens as uncivilized–she’s internalized this racism and thinks she’s “not like other Qazāli.”

At the beginning of the story, I didn’t know what to think of Luca and Touraine. They are interesting, but they’re also both on the side of the colonizers. Was I supposed to be rooting for them and their relationship? That misconception didn’t last long, though. Despite following the rules her entire life and devoting herself to protecting the empire, Touraine ends up in a situation that strips her of her rank and should have also cost her life. Luca steps in and saves her, hiring her as an assistant. This creates a complicated power dynamic between them–even more so than already existed. Touraine still isn’t free: “Luca was as much a jailer as she was a safe bunker.” She’s also disposable for Luca, who wants to use her to further her plans. Other soldiers are also resentful of Touraine’s new cushy life, while she misses them and feels like she’s lost autonomy. Over the course of working together and living in close quarters, Luca and Touraine form a complicated relationship that is mostly made left unexplained by both of them. They are drawn together and will continue to be throughout the entire book, but they don’t have a foundation there. They can’t seem to stay apart or forget about the other, but they never have an equal footing or healthy dynamic. It’s compelling, but it’s also frustrating and disappointing. Luca imagines what they could have been in different circumstances.

I really appreciated Touraine’s story arc, but it was also difficult to read. (Mild spoilers follow) She recognizes how wrong she was about Balladaire and Qazāl. She begins to turn against the power that has always treated her, the other “Sands,” and the Qazāli like dirt. Touraine evolves from trying to further her own career while protecting the “Sands” to looking out for the well-being of this occupied nation as a whole: “This looked like the losing side. It even felt like the losing side. It didn’t feel like the wrong side.” She stops trying to be the “One Good Qazāli:” “She didn’t want Balladairian respect. Not anymore.” At the same time… wow, this was hard to read. I was constantly surprised at how Clark would allow Touraine (and Luca) to make mistakes. Big mistakes. Mistakes with disastrous consequences that she had to live with. At each turn, I could understand their reasoning, but it was painful to read. Things just seemed to get worse and worse, partly because of both Luca and Touraine’s fractured loyalties and priorities. They both say they want peace in Qazāl, but they both have things they value over that (the throne, the Sands), and the choices they make to try to balance those two things tend to blow up in their faces. (Spoiler end here)

Even after writing a thousand words about this book, I’m still not sure how to feel about it. I appreciate it. I think it is a complex book the depicts the messiness and horrors of colonialism. It allows its characters to be incredibly fallible. It doesn’t shy away from the real-life consequences of their actions and of colonialism in general. But I also struggled to finish this book. The bleakness, the toxic relationship between Luca and Touraine, the gut punches of mistakes and their consequences–it wasn’t necessarily a story I wanted to come back to. And at almost 500 pages, it’s not a quick read to power through at that point. That is what it was trying to do, though, and I think it was a great accomplishment. I’m curious about where the trilogy will go, but I’m still on the fence about whether I want to return to this world again. If you want to read post-colonial/anti-colonialism fantasy, though, I highly recommend this one.