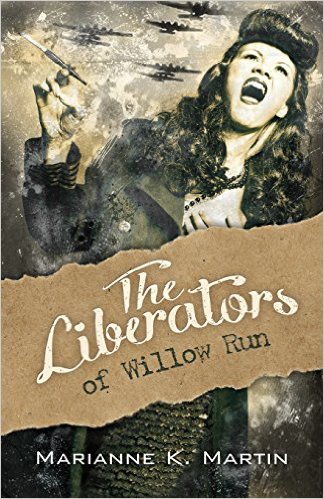 Can you use an electric mixer? If so, you can learn to operate a drill.

During World War II, the United States “enlisted” women to help with the war effort on the homefront. At the Willow Run plant in Ypsilanti, Michigan, Audrey Draper is securing her independence with each B-24 Liberator heavy bomber her crew assembles. The women tax their minds and limbs as they build plane after plane after plane. The demand is incessant, so for the most part no one cares about their co-workers’ personal lives unless it interferes with the work at hand.

In another world not many miles away in Jackson, Michigan, Ruth Evans is shipped off to The Crittenton Home, a place for families to hide pregnant, unwed relations. The deep friendships that Ruth develops with some of the women give her strength to overcome the limitations of her environment. These relationships will determine the course her life and the lives of those around her, takes.

Most of the women employed at the bomber plant are married or engaged or otherwise involved; Audrey and Nona are exceptions. For the world at large, Audrey has a boyfriend stationed overseas with the US Army. She isn’t comfortable with the lies her sexuality necessitates, but she does what she has to in order to protect her autonomy. Between 1943 and 1946, she has a steady job and folks don’t complain (much) about the slacks she wears or lack of rouge on her cheeks. It is what comes after the war that she worries about. Can she secure a meaningful career, one that doesn’t require too many personal compromises? While the novel wraps up all loose ends rather quickly at the end, the conclusion is not implausible. It resonates with the hopeful tone that permeates the story.

The tale initially alternates between Audrey and Ruth, converging a quarter way into the book when the two women meet and bond over scoops of ice cream. Their burgeoning friendship is impeded by guilt and insecurity. The Liberators of Willow Run follows a familiar push-and-pull romance, with the heroines discovering more about themselves and the women they will become as they help other people and each other. It’s a quick read; I devoured it on New Year’s Day.

The leads and supporting cast possess admirable qualities: they lift each other up, instead of trampling each other underfoot. Certain aspects of the story are a bit surprising. Nona’s ready acceptance of a secret Audrey shares at the start of their friendship, for example. Not to say that some folks aren’t unflappable; perhaps the two women’s status as “other” makes this acceptance possible. At times, the world of Willow Run feels like a sky with minimal clouds. This isn’t to say that the women don’t experience misogyny, sexual harassment, racism, and limited career options. They do, but those moments never feel insurmountable or harrowing. The novel could have easily gotten stuck telling too many stories at once or seeming to tack on certain narratives without infusing them with genuine feeling.

Secondary characters showcase a range of attitudes regarding women and African-Americans in the workplace. Up until the divergent narratives merge, I thought that Nona would play a larger role in the novel. She is a self-aware woman who is unwilling to sacrifice her educational and career goals. Unlike her white counterparts, she must contend with both sexism and racism. She is also generous in her friendships and confident when facing barriers. Jack and Lucy, a married couple who work at Willow Run and give Audrey rides to work, take a pragmatic view of life and seek a level playing field for folks who do the best they can. When riots near the church Nona is staying at prevent her from getting to work on time, Jack speaks up on her behalf because the foreman isn’t willing to listen to women. Myopic views on social roles are found in characters like the crew foreman, who constantly groans about women at the plant, and in June, a reluctant wage earner who believes a woman’s only place is in the home, raising children. She also ignores Nona, and speaks over Bennie, an easy going co-worker who stutters when he speaks.

The Liberators of Willow Run gives readers a world in which the family you choose enables endless possibilities.It brims with hope in the face of limited choices and half-truths. The women are keenly aware of their limitations, though their friends more readily see the good, the potential, that lie in their hearts. While I would have enjoyed more details placing me solidly in the United States during the 1940s, it was an overall enjoyable lazy day read.

Building The B-24 Bomber During WWII “Story Of Willow Run” 74182https://archive.org/details/74182StoryOfWillowRun