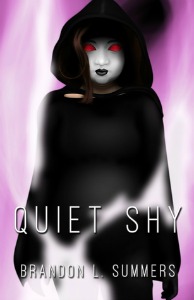 All Alexandria Fix wants to do is stay at home with her beautiful wife Quiet Shy, a woman from the future of an alternate reality. Unfortunately for Alex, her job continuously gets in the way of her time with her wife. Things only get worse when Alex becomes entangled in the doomsday plans of a dangerous cult.

Considering Quiet Shy is a relatively short novel, there’s a lot going on. Almost too much going on. There’s a large plot revolving around a cult wanting to bring about the end of the world, but it often seemed to get lost in the background of Alex and Quiet Shy’s relationship, as well as Alex’s frustrations with her work. There is also a subplot with Alex’s boss that ends in what I can only assume was meant to be a plot twist, but because there is so much else happening in the book it barely affected me at all. It took me a second to realize that a major piece of information had been revealed, because it came so seemingly out of the blue.

What frustrates me about all this is that because there is so much happening in this story, I couldn’t fully enjoy the sweet moments we get between Quiet Shy and Alex. There is an incredibly sweet section of the book where Alex and Quiet Shy go away on vacation together, yet all I could think of for the entire time they are away was “Do they really have time for this?” If the other aspects of the plot had been lengthened slightly, then having two or three chapters of just the girls alone on a vacation may not have felt so unnecessary and out of place. As it was, instead of basking in the domestic sweetness of Alex and Quiet Shy, I just scratched my head and wondered when they would get back to the action.

As well, most major plot points are resolved quickly and innocuously. As I already mentioned, a rather large plot twist evoked no emotion from me because there had been very little build-up and it was so sudden and, after a little bit of dialogue, never spoken of again. The cult plot is equally dealt with, and so is a strange, completely unnecessary, self-harm subplot.

Another frustration I had that could largely be attributed to the length of the story was the way that Alex spoke of Quiet Shy. All she ever seemed to have to say about her wife was that she was beautiful, sexy, gorgeous. Almost every compliment about Quiet Shy is based on physicality, and while I think it’s healthy for couples to be vocal about their attraction to each other (in fact, I think it’s necessary within a relationship), it did concern me that that was all that Alex had to say about Quiet Shy. Even when she is telling the antagonist how powerful Quiet Shy is, she prefaces it with “Not only is she incredibly sexy,” as if that’s somehow important to her statement. Perhaps if the story had been longer, Summers could have delved further into the intricacies of their relationship instead of keeping it as surface as it was.

All of that aside, I found the story unique and interesting. We weren’t bogged down by world-building, or too-long descriptions of characters and locations. The plot was original, and blended science-fiction and fantasy in a very interesting way. This was not a book that I had to force myself to finish, as I was genuinely interested in the outcome of the plots, albeit a little frustrated in how quickly everything came about.

I will give one warning about this book, however: it deals very explicitly with self-harm, both physical and mental, and overall this adds very little to the story, if anything at all. If this in any way triggers you, it would be best to give this book a pass.