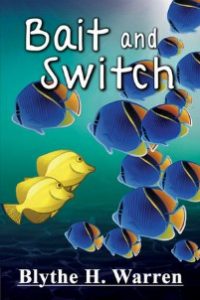 Bait and Switch is a sweet, moving and well-written romance which you’ll definitely want to read twice.

Our protagonist is dedicated marine biologist Liv Cucinelli who specializes in one-night stands. After an educational event at her aquarium, she is unexpectedly reunited with Mira Butler. Mira, the same woman who had ruined Liv’s life and college career almost two decades earlier, just happens to be the mother of Liv’s new favourite student, Cassie. Although Liv is determined to hold onto her lifetime grudge and remain hating Mira, she soon learns the truth about what happened all those years ago and her perspective on Mira begins to change. As Liv becomes Cassie’s babysitter, she and Mira build a tentative friendship which soon blossoms into a sweet romance.

I like that the plot advances quickly and smoothly while Warren avoids unnecessary angst and drama. The reveal about the history between Mira and Liv is really well-executed. As the women navigate their newfound connection and their own past hurts and insecurities, they also encounter difficulties at their jobs, Mira’s homophobic and ableist mother as well as issues in revealing their romantic relationship to their friends and families. I love that the characters feel like real people and they mature emotionally as the novel progresses. Liv is a funny and relatable protagonist and her first-person narration works well, adding just the right amount of humour and sarcasm to the narrative. Although the novel is from Liv’s point-of-view, Warren does a great job with the other characters. Mira is nuanced and well-written as she deals with her overbearing and horrible mother as well as her trust issues stemming from a cheating husband. She is definitely not the same woman whose ignorance and homophobia accidentally contributed to the fake rumour that destroyed Liv’s life.

While the book has a sweet and well-developed romance, I like that Warren shows us who these characters are outside of their relationship with each other. Liv has a wonderfully hilarious friendship with fellow commitment-phobe Patsy who she goes to for advice and who she neglects as her relationship with Mira intensifies. I also enjoy the fairly big role that the aquarium has in the book as well as the fact that Liv is ambitious and loves her job. The bond between Cassie and Liv is really special and heart-warming.

Did I mention how well Warren executes the usual tropes? Kid bringing two vastly different people together? Check. But, there’s a welcome twist: Cassie is a smart and friendly teenager who is also deaf. It’s nice that her difference isn’t her defining feature and she isn’t side-lined in the narrative. She’s a wonderful character who acts age appropriately and, even if you hate kids making an appearance in your books, you will definitely like Cassie.

Warren really makes the trope of enemies to friends to lovers her own. Liv and Mira are both well-defined characters with flaws and they do not fall instantly into perfect love. Instead, there are believable tensions and conflicts which are resolved quickly but naturally and with ample communication. Their relationship develops at a comfortable pace but there is definitely enough tension and heat to keep you interested. And, I can’t forget the found family trope paired with the holiday season because it’s handled just as heart-warmingly as you can imagine (if you can’t: think cuddling on the couch while watching Christmas movies, meaningful Christmas gifts…adorable!). Bait and Switch is a really well-written book with a wonderful happy ending. If you like excellently developed characters, a great romance, and you’re looking for a feel-good book, don’t miss this one!