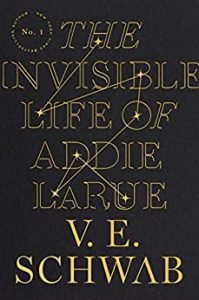 “Your characters begin to live the way you do, unrepentant. Never reduced to their queerness, only expanded by it. It infuses them in many ways, sometimes subtle, others loud.”

What does it mean to be invisible? As queer people, most of us are familiar with invisibility in many forms. For some of us, it’s being in the closet, having to deliberately conceal parts of ourselves; for others it’s a lack of representation, a blank outline where we should be in the media. The Invisible Life of Addie LaRue by V.E. Schwab is the fantastical and introspective journey of Addie LaRue, a bisexual immortal cursed by the devil himself to be forgotten by all who meet her, until she meets someone who finally accepts her and loves her for who she is.

I’ve always loved Schwab’s writing, from her X-men inspired Villains series, to the whimsical and enchanting A Darker Shade of Magic series. One thing that I always appreciated in her writing is the casual inclusion of queer representation; Prince Rhy Maresh makes Alucard his prince-consort in the magical Red London, and the anti-hero Victor Vale’s asexuality is a valid part of his identity.

Following the immediate publication of long-awaited The Invisible Life of Addie LaRue, author V.E. Schwab came out as gay in a moving interview for Oprah Magazine. Schwab’s coming out was touching and it was refreshing to discover one of my favorite authors was queer as well. In the article, she cites the queerness of her characters as a tool to becoming comfortable in her own sexuality and skim, a theme that is echoed throughout Addie LaRue’s life, as love allows her to discover her true self and worth.

The Invisible Life of Addie LaRue is more of a character study than a romance; although Addie does not shy away from describing her female partners in the same way as her male partners, the true core of the book is Addie’s character development. Addie begins the story in 17th century rural France, a desperate teenage girl willing to sell her soul for the chance to to escape an arranged marriage, and live openly on her own terms. Lucifer, ever cunning, gives her the freedom and immortality she longs for, but curses her to be forgotten by all who meet her, dooming her to a life of isolation and sorrow. Throughout her eternal life, she is haunted by the charismatic, seductive devil himself, and nearly loses herself to his deceit. As she grows older and wiser, she learns that although she is forgotten, she will still be remembered through the marks she leaves behind on people’s lives, history and art. When she meets Henry Strauss in 2014, they slowly fall for each other after learning they were both marked by Lucifer. With Henry’s support and encouragement, she begins to find the strength to tell her story and defeat the devil on her own terms.

The novel embodies Schwab’s familiar, haunting prose, and introduces us to a cast of unique and lovable characters, the majority of which are LGBT. Henry’s friend group feels like a love letter to gay friendship as a whole, illustrating the inside jokes and affection only a group of queer people can have for each other. I also loved following Addie through history, seeing the world change and advance around her. The use of multimedia and art as a motif was particularly moving; the art we make acts as a stark indicator of both who we were, are and will be, and the world we live in.

The Invisible Life of Addie LaRue is a microcosm of a life’s journeys and discoveries. Addie’s imperceptibility can be seen as a metaphor for being closeted; Addie sells her soul for the opportunity for freedom, and the ability to choose who to love outside of the pre-conceived notions of narrow-minded people in her small French village. Thus, Addie is erased from the forefront, a vital part of her identity disregarded and ignored, her contributions lost to the sands of time, like many queer individuals through the annals of history. Addie is isolated and cut off from anyone like her, similar to being in the closet. It isn’t until Addie meets Henry, someone else who is cursed for wanting love and acceptance on his own terms, that she is able to see herself in him and come into her own.

The Invisible Life of Addie LaRue is a moving reflection on isolation and what it truly means to be human, summing up the collective need for companionship and acceptance in a tale worthy of the Brothers Grimm for the modern age.

Thank you to the publisher and Edelweiss for the advance review copy.