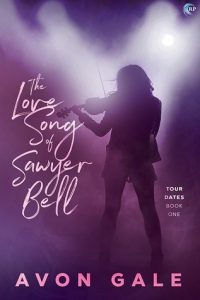 Victoria “Vix” Vincent is an alt-country rocker girl and Sawyer Bell is a sweet, innocent violinist running away from Juilliard to join in Vix’s band. Vix is an out bisexual and Sawyer is figuring out whether or not she’s a lesbian (spoiler: she is). I feel like this might be a basis for an Avril Lavigne-type song. Now I have “Sk8r Boi” stuck in my head.

I’ve always wanted to be in a band and go out on the open road with my friends and play music. The Love Song of Sawyer Bell didn’t candy coat how hard it would be to live that kind of life when you don’t have financial backing of a major label. Touring is grueling and often gross, but at least you’d be doing it with your band-family instead of completely alone. And you’d get to live the dream of being a performing musician. It’s not glamourous, but the book still made it seem fun, and I felt like I was there with the band.

The relationship between Vix and Sawyer was just so…normal. I don’t mean that in a bad way. These two women would have fights, sulk about it for a day or two then talk it out and make up. Just like most normal couples do, but with a little flair to kick up the story. I did think Sawyer, perhaps because she was newly out and insecure about her place in the world outside of being a fiddler, was quick to push Vix away. While Vix was afraid of telling Sawyer how she really felt. Both are perfectly relatable for ~us millennials~ who are still figuring our lives out while entering into a new relationship.

Sawyer’s unhappiness at Juilliard and her bit about feeling betrayed that something she wanted she got, but ended up hating it really resonated with me. It’s hard when you work hard towards something, think you made it, and then it turns out worse than you expected.

I did find Vix to be a bit preachy about bisexuality, but with so much erasure and misunderstandings in all forms of media, I couldn’t really be mad at it.

Completely unnecessary for this review, but can I say that my fancasts for this book are totally Melanie Scrofano for Vix and Dominque Provost-Chalkley for Sawyer? I know they play sisters on tv and the opposite in height, but it’s who I pictured the entire time I was reading.

I liked The Love Song of Sawyer Bell. I’ll definitely read the next book in the series and I hope Victoria Vincent gets the success they deserve.