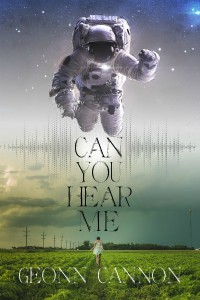 Colonel Noa Laurie, sole survivor of the catastrophic failure of her space station, heads back into space once more on a mission to help eradicate space debris, on her own. She has volunteered to pilot the one-person Orbital Debris Independent Eradication (ODIE) engine, circling the Earth over the course of her two-year solo mission. She doesn’t expect to have contact with anyone but the scientists in charge of monitoring her progress, and the occasional classroom of schoolchildren interviewing her – so she gets a shock when her communication system is somehow connected with the old radio in Jamie Faris’s woodworking barn in rural Indiana.

As the ODIE orbits the Earth, the two are within each other’s range for an hour a day – and they soon come together every day to spend every minute of that hour talking (at least, when it doesn’t coincide with sleeping). Noa and Jamie’s unlikely friendship deepens, becomes a sort of flirtation, and then takes a turn for the romantic. The novel alternates sections showcasing them as they go about their daily lives, thousands of miles away from one another, and then as they come together to talk, share stories, flirt (and eventually, have radio-sex). But the impossible-to-surmount distance makes things difficult, and so does Jamie’s ex-husband Louis, who is hell-bent on getting back together with her: there are many obstacles for Noa and Jamie to overcome, if they want to make things work together.

Can You Hear Me? is a delightful slow-burn romance: the improbable premise is a lot of fun, without being too convoluted or hokey, and it allows Cannon to deftly develop Noa and Jamie’s relationship and deep emotional connection, making their emotions, hopes, and concerns feel real. Their communication veers effortlessly from sweet to sexy and back again: they are both truly delightful characters, who feel fully realized. The sections of the novel that delve into their separate lives help flesh them out, and make their very-long-distance relationship feel all the more poignant and true.

One misstep, that seemed all the more glaring given how sweet and moving the rest of the novel is, is a throwaway comment by Noa as she and Jamie are discussing the fact that Noa doesn’t know what Jamie looks like, having only ever heard her voice. She makes a crack about not caring as long as Jamie doesn’t have a penis, which is transphobic and entirely unnecessary (and not to mention a thoroughly tired remark). It’s regrettable that this comment was included at all, and that it isn’t addressed.

Can You Hear Me? does do a decent job of portraying Jamie’s bisexuality: it’s an important part of her identity, and it exists independently of the dissolution of her relationship with her ex-husband and her growing relationship with Noa. Her ex is an ass about her being in a relationship with a woman, but he’s pretty clearly a villain in the story. All the characters who matter to Jamie, including her sister, and Noa, don’t question or demean her sexuality.

And something Can You Hear Me? gets very right is the portrayal of Noa and Jamie as whole people. Their connection and their burgeoning relationship drive the plot, but they lead interesting, independent lives – lives separate from one another because of physical distance between them, but lives that they choose deliberately and tenderly to share with one another. The arc of their relationship is a pleasure to take in, but so is their development and growth as human beings.

Can You Hear Me? is a delightful and well-developed romance, with a fun premise and good pacing, that hits almost all the right notes. Noa and Jamie are both endearing characters, who make a relationship unfolding through radio conversations from thousands of miles away seem like the most natural thing in the world!