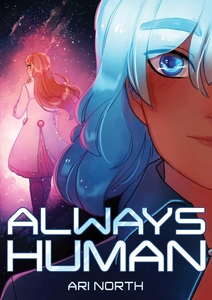 Ari North’s Always Human first appeared as a serial on WebToon, running from 2015-2017. Yellow Jacket published it as a collection in May 2020 as part of a sponsorship with GLAAD.

This comic series follows two young women, Sunati and Austen, as they navigate a new, romantic relationship. Set in a future world where almost everyone wears body mods, a technology used to enhance appearance or capabilities, the sci-fi scenery is lush and intriguing. But not everyone can wear body mods. Some, like Austen, have Egan’s syndrome, a condition that compromises the immune system, making body mods impossible to wear.

The story is filled with sweetness and angst as Sunati and Austen learn to understand one another, making mistakes, pulling apart and coming back together. Sunati first finds Austen attractive because she thinks she’s so brave for not using body mods. When she finds out it’s because of her Egan’s syndrome, Sunati puts Austen up on a pedestal, making it seem like her life with a chronic illness is an inspiration.

It really speaks to the attitude that exists in the real world about able-bodied language and perspectives. Those with different abilities are often held up to these impossible standards to serve as inspiration and awe for able-bodied people. Austen also frequently deals with others tiptoeing around her, because they think if they use body mods around her she will get upset. She doesn’t want special treatment and she doesn’t want others to look at her as some kind of saint. She just wants to be human.

Throughout the series Sunati and Austen get to know each other in the sweetest scenarios, creating that warm, fuzzy feeling that readers love about romance. The characters are honestly two huge dorks in their own ways, but that’s what makes them so loveable and perfect for each other. But perhaps the best aspect of their relationship is the open and honest communication. They don’t always get things right, but they talk through their problems and come to see the world through one another’s eyes, gaining a better understanding each time. It’s a wonderful example of a healthy, happy relationship.