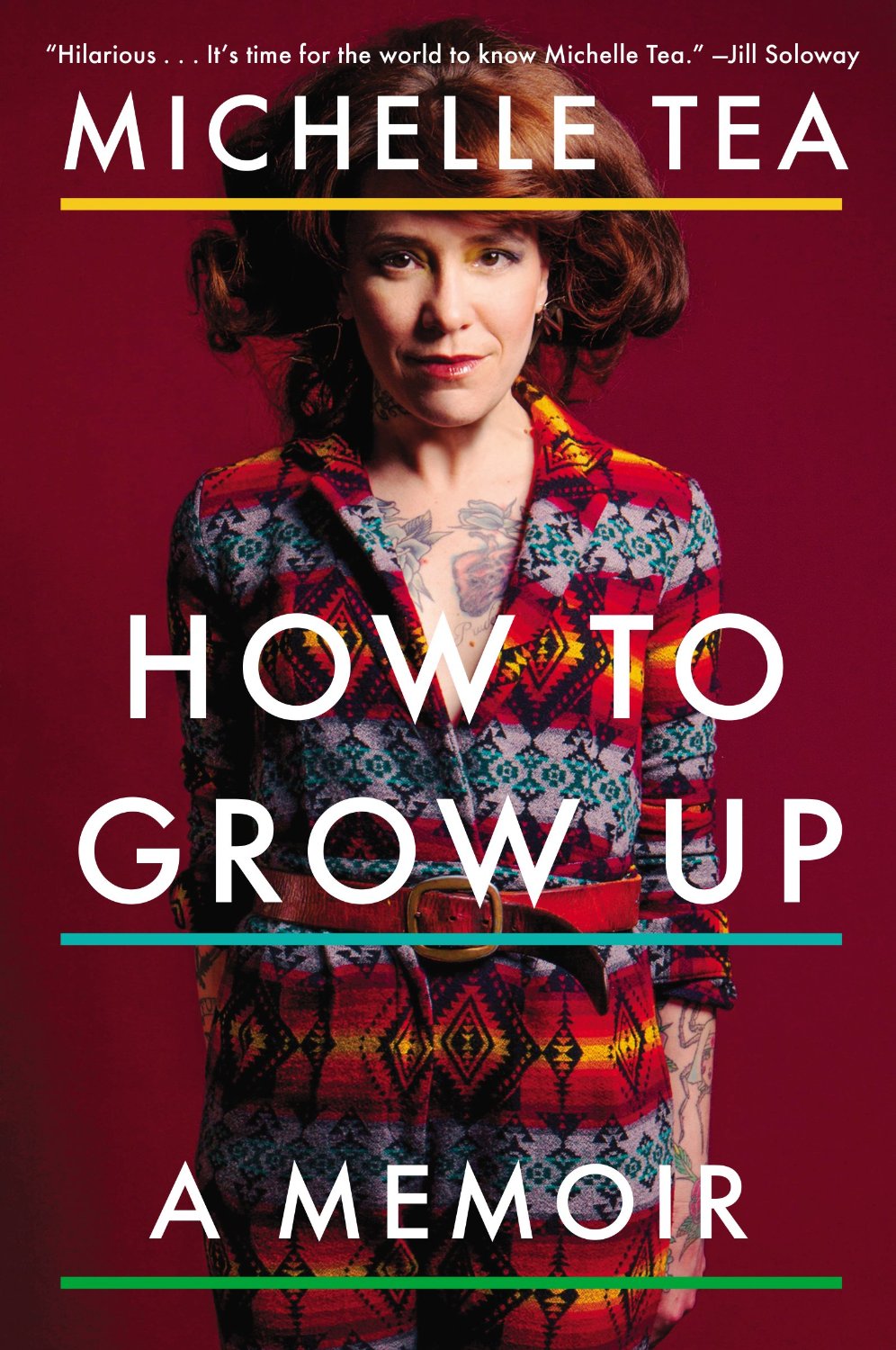 My wife and I are currently trying to buy a house, which is surreal, and it’s made me wonder about what it means to be–or feel like–an adult. Like magic, I found a copy of Michelle Tea’s latest memoir on that very topic. Since I’m a fan of Tea’s other writing, I picked it up. I figured that Michelle Tea is always fun and this book would likely present an interesting take on being a grown up.
How to Grow Up primarily covers Tea’s late thirties and early forties as she stumbles into adulthood. In her late thirties, Tea is sober after years of addiction, re-entering the dating world after spending 8 years in a dysfunctional relationship, sharing filthy housing with twenty-somethings in San Francisco, and dealing with the psychological, emotional, and spiritual issues. Eventually she moves to her own grown-up apartment, starts trying to get pregnant as a single person, forms a healthy relationship with a great woman, and gets married. Though she doesn’t delve much into how she made it happen, Tea has an amazing career in the literary world, something she managed to start even before she got sober. I was surprised she didn’t spend more time on this topic, since I think that having a career is a huge measure of adulthood–and something Tea has a handle on.
How to Grow Up was fun to read, but it wasn’t quite what I was expecting. This memoir is not linear, broken up into 15 themed essays that aren’t strictly chronological. Tea isn’t the most linear person, so this fits her personality. The downside is that she sometimes tosses out references to events or issues the reader doesn’t know about yet, or retreads the same experiences in multiple chapters.
The other odd thing about How to Grow Up is that periodically the book veers away from Tea’s interesting life and into advice dispensing. A lot of these life lessons struck me as obvious (such as “Don’t date people who sell pills in bus stations”), particularly after you read Tea’s stories. While I liked reading about Tea’s adventure in Paris after her long-term relationship ended, I didn’t need the rules about “how to break up” that preceded it. Tea is a great storyteller, but she’d make a terrible advice columnist, and her attempts to be one drag down her book.
The book didn’t explore issues as deeply as I would have liked. Though Tea looks at class, privilege, and her own background as a working class person, she also name-drops designer brands and insists that her higher power wants her to have these expensive, unethically made items. Her analysis of the contradictions that she holds boils down to, essentially, that all people have contradictory values and impulses. I don’t entirely disagree, but I also wanted more of her thoughts about these issues and less ink about Fendi bags. At times her contradictions are baffling, something that could have been intriguing if looked at more closely.
This book is reassuring, though, and I did feel better after reading How to Grow Up. Everything worked out for Michelle Tea in the end, despite all the detours and the weird choices she made. I’d recommend this book to fans of the author and to people who feel like they’re failing at being grown-ups, with the acknowledgement that the book has limitations. I’d recommend skimming or skipping the advice and lingering instead in the stories.