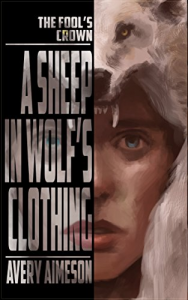 “You won’t find anyone in this town straighter than a pretzel.”

A Sheep in Wolf’s Clothing is the first book in the Fool’s Crown, a supernatural/urban fantasy series. The book contains themes of domestic abuse, sexual violence, and homelessness. An enjoyable read, but without much resolution, making it a two star book.

I was drawn to this book because I was in the mood for a typical paranormal romance novel filled with cheesy tropes where I could fall into the story and forget the stress of starting a new job. This book was not quite what I was expecting, although it was wonderfully escapist. The story focus was not on romance, as the protagonist was escaping a relationship not falling into one. This really worked in the book and opened up the story, and I didn’t feel at all disappointed.

A Sheep in Wolf’s Clothing is about a homeless woman caught in a Supernatural city sealed of from the world of ‘Humies’. Using her skills with makeup and her acting training, our human protagonist shifts through an Identity for every day of the week to escape her abusive Witch of an ex-girlfriend. Along the way she meets a plethora of beautiful women (with shapely bodies and skin hugging clothes), including a Werewolf policewoman, a Succubus who runs the shelter for abused women, and a Vampire who always smudges her lipstick since she can’t see her own reflection.

This brings me onto one of my favourite things about the book: its humour. It is aware it’s a trope filled supernatural/urban fantasy, and the first person narrative brings a little bit of meta humour whenever she encounters a genre cliche. Lesbian puns are laced throughout the book too, leading me to giggle out loud on the bus to work a couple of times. This humour supports some heavy themes, with the main character fleeing domestic abuse, and also escaping from a horrific past. The book talks about these themes and allows you to face them without losing it’s escapist charm.

There is one ‘adult’ scene, which features reluctant/ unwanted sexual interaction. This scene made me rather uncomfortable and I felt the book came close to glamourising such situations, which was disappointing in a book that was rather sex-positive overall.

The main character, a human, is rather prejudiced against the Supernatural creatures she’s been living beside, believing none of them can be trusted as they all must just want to turn her. This can be a little annoying in places, but it makes so much sense for the character. [MILD SPOILER] Throughout the book she is led to confront these prejudices and becomes more accepting as she learns to ignore horror films from the land of humans, and instead listen to the people around her. [SPOILER ENDS]

However for all it’s examination of ‘Humie vs Supe’ suspicion and inter-supe racism, the book doesn’t look at racism as we know and see in the real world. The book even erases it, with one of the character remarking how odd it would be if humans went around calling each other by their race not their name, ignoring the fact that humans do indeed do this. Aimeson may have been trying to draw attention to the fact that this behaviour is ridiculous, but it came across more as her washing over the problem, which I take issue with in a book where there seemed to be no diversity of skin or culture.

Overall though I enjoyed this book, and it hit the spot perfectly for the WLW romp I was craving. This is a debut book–and you can see this in the writing. Over all it is very easy to read and you can fall into it quickly, however at times the story can be a little confusing. It’s biggest weakness is the end. Overall the book has a slow, light-hearted, lazy pace. Then the story escalates rather quickly–only to stop on abrupt cliffhanger. There was none of the resolution I expect from a good book, and this damaged my experience of it considerably. It sets up for what looks to be an interesting Fantasy series, I just wish more of the actual story had made it into the first book. Nevertheless as I enjoyed the humour, I am curious to see how the story progresses and will probably check out the second book when it comes out.

This story is perfect for fans of Holly Black who are after something a bit more light hearted, Pulp Fiction Stories, and fans of Urban Fantasy in general as they will love the in jokes from a narrative character who has read the genre too.