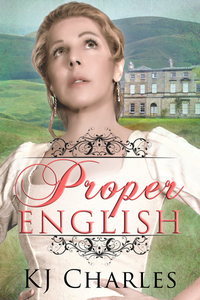 KJ Charles’ Proper English is a country-house murder mystery following Patricia Merton, expert markswoman, as she attends a shooting party that is going wrong in every way it possibly can. The hosts won’t rein in their bullying son-in-law, they’ve accidentally had to host twice as many people as expected, and Pat’s old friend is ignoring his beautiful fiancée, Fenella, who Pat can’t take her eyes off. And that’s all before the murder!

(This is also a prequel to KJ Charles’ Think of England, an m/m country house mystery where Pat and Fen were first introduced, involving spies, blackmail, and betrayal!)

I enjoyed this Proper English very much! The narration is hilarious, especially when it assesses things like men, fashions for women, talking about the weather, the tropes of country-house mysteries… Pat is very sensible and practical, and seeing her respect and fall in love with Fen and see through Fen’s performance of frivolity warmed my heart. They have very different skill sets and approaches, and seeing them work together is brilliant! It helps that Fen gets to be fat and unabashedly femme, and the narrative never treats this like it’s a problem or something that she needs to change!

The mystery itself is very satisfying; there are so many subplots and sources of drama waiting to go off, and every character seems to have a secret that could be exploited by a blackmailer! And the victim is an absolutely horrible person, so it’s understandable why people might want him dead! I find it quite strange that the murder doesn’t happen until about two-thirds of the way into the book, although I can understand wanting to get the romance settled and not have to weave it around finding a man dead. The resolution is definitely worth it though, as it’s very satisfying.

In conclusion, it’s really good. If you like country-house mysteries and, like me, have been desperately hunting for queer versions of the tropes, this is the place to start.

This review is based on an ARC from the author.
Caution warnings: verbal abuse, blackmail, homophobia from a villain