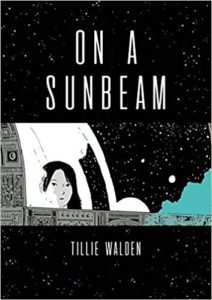 Tillie Walden’s On A Sunbeam is a beautiful f/f science fantasy graphic novel that started life as a webcomic. The first half is split between Our Protagonist, Mia’s, present, where she’s part of a crew that restores old buildings IN SPACE, and her time at boarding school where she has a fledgling romance building with the sweet-but-unusual Grace. The second half shifts up a gear into Perilous Adventure as the crew of the Sunbeam go looking for closure.

I’ve mentioned how much I like Tillie Walden’s art before, and On a Sunbeam keeps up the tradition. I love her use of colour and space, and the way her art carries so much of the world building and storytelling. Everyone lives on tiny chunks of land in space and spaceships are fish, it’s never explained, and I am quite happy to roll with that because it looks really cool! (Please recommend me more stories where space is treated like the sea, I’m always here for them.) There is a real sense of history and age to the buildings that Mia and the Sunbeam’s crew work on, and different architecture across the galaxy. Plus, Tillie Walden’s use of limited palettes across the entire story means that it’s always clear what time you’re in and which characters you should be expecting.

I was so fond of all of the characters – they all felt realistically complicated and had tangled relationships with each other, and I love them? And they all have their own things going on, or their own secrets in their pasts, and I like that! Especially the non-binary non-verbal badass, who is an actual force of nature. (As fair warning: for the most part, everyone’s really respectful of Elliot’s pronouns and not speaking, but there is one minor character who doesn’t even try, despite how upfront Jules is about making sure people know. She does get dressed down for it, and only has maybe three scenes total, but it is a factor.)

Spoilers in the next paragraph!

There’s something so realistic in the way that Mia talks about her life after Grace – it went on as normal, and the way she talks about that is refreshing and warming. Yes, there is life after whatever dramatic events happen to you, and sometimes they are ridiculously normal and boring! And the way the story opens up in the second half is like a magic trick; the Staircase comes across as a weird space full of culture and dangers that are completely alien to everyone. A lot of it went unexplained, but I thought that worked with the style of the story itself. We get bits and pieces from Mia’s memories of Grace, and from Elliot. It’s very character focused, even in the section that’s most full of action and drama, which means that we get the pieces of information most relevant to the characters, rather than getting all of it in chunks. And the ending is so hopeful, to me. I appreciated that Mia and Grace don’t fall straight into each other’s arms; they’ve grown into different people, and now they’ve got an opportunity to work out who the other one is!

And because I’m me, I would like to take a second to wail about the families in On a Sunbeam! There are families of origin, families of choice, families who love each other and drive each other up the wall and will do whatever it takes for their family! It’s delightful and sweet, even with all of the drama and peril.

Basically, I adored On A Sunbeam in all its weird space-fish glory, and I can’t recommend it highly enough!