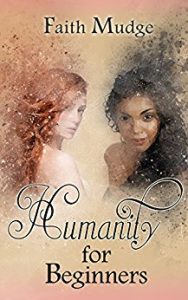 Humanity For Beginners by Faith Mudges is an absolutely charming novella about a group (not a pack; definitely not a pack) of lesbian werewolves running a B&B in the Lake District.

Gloria has, unintentionally, set up a half-way house for lesbian werewolves. She is a former soldier, and the owner of the B&B; Nadine is the cook, who escaped from an abusive pack; Lissa, is a nervous former street-kid turned waitress; and Louisa dropped out of university to join the team and process being a werewolf after meeting Lissa on tumblr. They have a good routine down… Until Louisa’s family comes looking for her, and the beginnings of a new pack move into the area.

The world-building is interesting–a lot of it is done through the headlines in the newspapers, with typical punny-headlines in the wake of the full moon, or in the hints that are dropped about characters’ pasts (such as Nadine’s.) What hints we get highlight that the four of them are explicitly rejecting the norms of the world-setting for werewolves; they have opted out of what might be described as the “traditional” werewolf power structures, forming a family (not a pack) where Gloria manages to be the de-facto leader while also explicitly rejecting the idea of alphas and being an alpha. I found the depiction of being werewolves and the explicit separation of wolf-dynamics from people-dynamics to be really interesting.

Humanity For Beginners has a great sense of humour as well! Gloria’s low-level exasperation with being a werewolf made me laugh from page one, along with how well thought out the coping strategies for being werewolves are (it involves a lot of chew-toys.).

The humour’s balanced out by the beautiful relationships. The relationships between the four women are really well-sketched and heart-warming. There is a genuine sense of responsibility, protectiveness and respect for the autonomy of everyone running the B&B (even if sometimes they go too far into the opposite direction), and seeing the two romantic relationships grow delighted me. Even the relationships with outsiders (such as Gloria’s brother, or the B&B’s gardener) are well done, and have genuine affection in them. It’s particularly interesting contrasting the relationships everyone has with the people at the B&B with the relationships it’s hinted at them having outside of it.

I think what I really liked about it was that it’s a quiet story. There is some conflict–both socially, in the form of Louisa’s family and in Nadine and Gloria attempting to renegotiate their relationship; and physically in the form of the new pack who want to absorb Gloria’s family into theirs. The resolution to all of these felt so satisfying, but all of the reactions felt realistic and sensible instead of melodramatic, which I appreciated.

If you like stories about women building their own families; if you want sweet, heart-warming romance; if you want an urban fantasy story that is more funny and peaceful than action-heavy; if you want middle-aged women falling in love; this is the book for you, and I can’t recommend it highly enough.

CW: Mentions of abuse, but nothing explicit.

One Reply to “Susan reviews Humanity For Beginners by Faith Mudges”