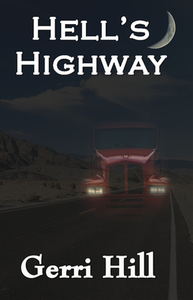 Hell’s Highway by Gerri Hill is the sequel to Devil’s Rock, a procedural following FBI agents Andrea Sullivan and Cameron Ross (that I reviewed here!). In Hell’s Highway, they are working and living together in Cameron’s fortified motorhome-slash-giant-mobile-computer-lab, when they’re sent to track down a possible serial killer preying on women along the I-40.

I… Had some problems with it. I’ll start with a problem that has carried over from Devil’s Rock, which is Cameron Ross. She freely acknowledges that she is a petty bully, but this acknowledgement doesn’t come with any particular change of behaviour, which makes her really frustrating to read about. There is even a scene where she makes another character surviving an assault all about her own feelings, to the point where more time is spent on Cameron’s fear of loss than the pain of character who was actually assaulted!

Which leads nicely to another problem I had – there is consistently very little emotional resonance. Characters are killed, and no one cares because they were pretty much blank slates. There’s no tension about the investigation, or the final scene where they confront the serial killer – the former because it’s suspiciously easy, with the serial killer practically walking up to them on their first attempt, and the latter because it’s accidentally defused by the characters not taking the confrontation seriously. The entire mystery feels too straightforward, which is regularly lampshaded by the characters going “But how are you using a computer to get this information?” and “But this is all speculation!” which does not help. If you’ve ever read the In Death series by J. D. Robb, where the police can get probability readings on their hunches, it feels a little like that, but without the scifi underpinnings to back it up. (Also, J. D. Robb actually allows her computers to be wrong occasionally.)

Apart from that, it managed to be a story about the murder of sex workers that never actually showed a living sex worker on page, which was impressive in a bad way, and it also highlights some of the plot holes in the novel and never resolves them, like “How did the killer get so much C4?” and “Why would an explosives expert aware of that the killer sets traps not check for booby-traps?” It feels lazy, to be honest, and I think that’s what’s frustrating about it. The author is clearly aware of the problems with Hell’s Highway, but never fixes them. It doesn’t help my frustration that it has characters who are law enforcement cheerfully planning extra-judicial killings from the get-go. I know the book was published in 2011, but seriously?!

(I am VERY frustrated by the way Gerri Hill presented Carina by the way; she finally gives us textual acknowledgement that bisexuals exist, after several books where characters have slept with both men and women, but have to be monosexual! But she seems to conflate Carina’s enjoyment of casual sex and polyamory with her bisexuality, and makes her an antagonist to Andrea and Cameron’s relationship in a way that telegraphed her eventual fate in big letters. It was Not Great.)

Hell’s Highway was written competently enough that I did read the whole thing, but I honestly couldn’t say I recommended it unless you enjoy yelling about things on twitter.