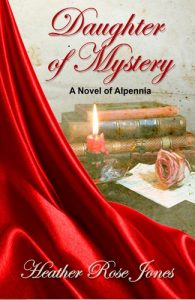 Heather Rose Jones’ Daughter of Mystery is a fantasy of manners, set in the fictional European country of Alpennia during the early nineteenth century. The focus is on Margerit, who wishes to be a scholar and inherits a Baron’s fortune… And his bodyguard, much to their mutual dismay. Barbara, the bodyguard and a feared duelist, was promised both freedom from the Baron’s service and the truth of her parentage, which she is denied in favour of being bound to Margerit’s service until they are eighteen. Together, the navigate intrigues, Regency-era society, and the titular mysteries.

This book managed to consistently confound my expectations. Every time I thought I knew what I was getting, I turned out to be wrong. I was expecting a Regency romance with minimal physicality and maximum philosophy from the reviews I’d already read, but I somehow managed to miss that this was a fantasy series as well! The focus is also not as much on Margerit achieving her goals as a scholar and her introduction to society as it is on the philosophy and mechanics of what she’s studying, which threw me at first. Daughter of Mystery does not throw aside Margerit’s goal of going to university, which I appreciate, it just didn’t spend more time on it than was required to establish that she found Her People through it, and that they would be working together.

The subject of this work is one of the mysteries of the title: in Alpennia, appealing to the Saints in a specific manner can produce magical effects, known as Mysteries. The way Mysteries are written and discussed has a very academic, technical tone to it, especially as a fair amount of the discussion is how to reconstruct them from conflicting sources, which I quite enjoyed! (If you have ever studied history or philosophy, this tone is probably going to sound familiar to you.) If you decide that this is not for you, however, there is a lot of it and it is quite slow. I have to admit that missed that this was the philosophy that everyone mentioned in reviews the first time around, as I mentally filed it as “the magic system” and made no further demands of it, so it is possible to let it wash over you if that’s what you prefer!

But these are not the only mysteries in the book. There is the mystery of what Baron Savese (Margerit’s benefactor and Barbara’s former… Patron? Owner?) was scheming before his death, as those schemes have repercussions that ripple out and affect both protagonists long after his death; there is the mystery of Barbara and who her family was; and there is attempting to work out which factions are working against Barbara, Margerit, or both. The resolutions to the web of secrets around Barbara was particularly nicely handled, I thought? Daughter of Mystery dug into the the reactions of the reveal, which was particularly satisfying to see because usually those emotions are left unresolved, especially when it is too late for there to be repercussions for the secret-keeper. And it leads to an explicit conflict in how the protagonists view a character, which was excellent to read.

But I’ve not gone into the characters or the romance yet! I adored most of the female characters in this book; Margerit’s guardian has an arc about getting into a relationship as an older woman, and Antuniet is a prickly fellow-scholar who is the protagonist of the second book. (The male characters mainly serve as obstacles and threats, with maybe a few exceptions.) Margerit is passionate about her learning in a way that I enjoyed, and she just discovering that it’s possible to be in love with a woman, which is written in a very sweet way that I enjoyed – if you, like me, enjoy a lot of unspoken desperate longing, hyper-awareness of the other person’s presence, and two people desperately trying to protect each other without letting the other one know, do I have a recommendation for you! But Barbara is my favourite, as a fierce and protective woman trying to steer Margerit safely when Margerit has no concern for the hazards of what she does. The book is also very clear in using Barbara’s in-between position (not quite a servant, not quite a noble, but the one who understands both worlds) as a contrast with Margerit’s status (country nobility and new money, with no understanding of the position she’s been thrown into) to explore class and classism, which I enjoyed. My biggest problem with their relationship is that towards the end, the “unspoken” part of their longing crosses the line into melodrama, in a way that distorts their characterisation somewhat and could have been resolved with literally a five minute conversation.

My biggest problem with this book, honestly, was not the ending though. It was that the pacing is a bit odd. It’s a Regency novel with a philosophical bent, so I was expecting it to be a little slow, but there is a point towards the end where literally all the main characters do is sit around and wait for four months. This was partially to give depth to the romance and aid in the resolution of Barbara’s parentage, but it stuck out to me because that four month timespan has so much activity happening against Margerit and Barbara, but we see none of it. I suppose that’s a problem that shows up earlier in the story; it’s told from a very restricted point of view, the villains move in very different circles to our protagonists, and the schemes tend to have many moving parts behind the scenes, so we only see the results, if that? But it was very puzzling to read.

All of that said: I found this very compelling! I was so invested in the relationship between Barbara and Margerit, and I did manage to hand-sell this book to three people after I read it. If you like fantasy, Regency romances, and/or reading about characters piecing together history, I definitely recommend it.

Caution warning: there is an attempted sexual assault early in the book.

(The copy I read was a review copy from The Lesbrary)