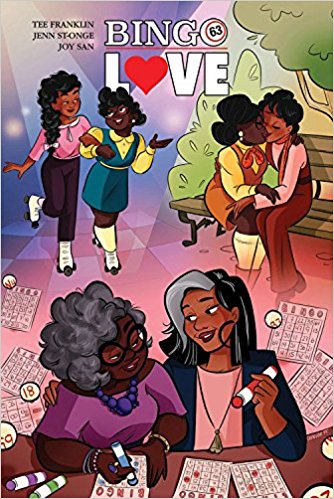 I’m pretty sure that I can’t discuss Tee Franklin and Jenn St-Onge’s Bingo Love without spoilers, because the things that naffed me off the most about it are all massive honking spoilers. It’s a second-chance romance; Mari and Hazel meet again in their sixties and decide to pick up where they left off as teenagers when their homophobic families forcibly separated them. The art is fantastic, I especially love the way that the colours are done, everyone’s looks are excellent. I liked how supportive and loving Hazel’s children were eventually, although the fact that Hazel gets homophobia from all generations of her family is upsetting. The dialogue was quite stilted, but some of the conversations – especially the ones about boundaries–were pretty good. And… That’s the most I can say about it without spoiling anyone. Abandon hope all ye who enter here and all that jazz!

Okay, so I was mostly on board with Bingo Love until it turned out to be The Notebook with queer women. (I wasn’t kidding about the spoilers!) Like, my hatred for The Notebook is as deep as the sea, so that particular reveal was hugely disappointing to me! It turned a few things that I thought were continuity errors into foreshadowing, which was good! It made the cold-open make sense, because as it was Hazel appears to hear someone begging for help after being made homeless by their homophobic family and immediately make it about how much worse queer people had it when she was a kid. No! It’s just how she launches into telling her life story to her wife with dementia. I guess queer women (and especially queer women of colour) deserve to have their own version of The Notebook, if that’s what they want? But for me, it was the tipping point where I couldn’t ignore the things that bugged me anymore.

For example: Mari and Hazel seeing each other for the first time in forty years and immediately running to kiss each other was baffling to me. They’re different people now! Surely there needed to be some build-up or getting to know the adult versions of themselves before the kissing and leaving their husbands! … Actually, I think lack of build-up is the problem for most of the book, because fifty to sixty years are whizzed over at lightspeed, which means that the relationships don’t feel like they have a solid foundation. Not to mention I’m fundamentally suspicious of Hazel’s therapist drawing a distinction between “someone who is the same gender as you” and “someone who identifies as the same gender as you,” because I can’t tell if it’s supposed to be trans-inclusive and missed, or if it’s just being transphobic.

I think what I’m saying here is that Bingo Love is flawed but could be serviceable for someone who isn’t me. The art is good, and getting to see two queer women of colour getting married with their families around them was worth the price of admission. It was just the stuff around that making me twitch.