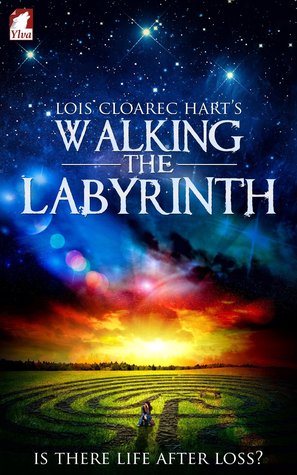 Walking the Labyrinth is definitely not the typical formula for a lesbian romance novel. It begins one year after Lee’s wife dies. Lee is deeply in mourning, and has grown listless and depressed. Her family and friends stage an intervention, as her late wife requested before she died. Lee receives a letter her wife wrote at this time, and this provides the impetus for her to try to find a new purpose.

As you can guess from that synopsis, Walking the Labyrinth has a lot to do with mourning. But I appreciated that it started so far into the mourning process. Many books would have started with the immediate shock of death, but this actually provides a much better beginning. It is the turning point, where Lee is ready to change. This is mostly a slow-moving book, which works with the subject matter. I found it really easy to read, partly because it is a scenario that I haven’t read a lot about. Lee is lost after her wife’s death, and is unsure about her career and what she wants to do with her life. She goes on a journey to try to figure herself out. The inevitable romance is again introduced slowly. It seemed organic for the most part.

Another interesting thing about this book is the spirituality that pervades it. Maybe I should have guessed that a book concerned about mourning would also ruminate about the soul and afterlife, but I wasn’t expecting that. I’m not entirely sure how I personally felt about it. Lee is skeptical, but intrigued. I am not a particularly spiritual person, so I wasn’t as interested in this aspect, but I think it was presented well. If any talk about “soul journeys”, reincarnation, and so on puts you off, I wouldn’t recommend this one. But if you’re open to the discussion, you’ll probably find it at the very least an interesting viewpoint. I also appreciated reading a romance novel that focuses on women in their sixties instead of mid-twenties.

Overall, I appreciated the natural progression of this novel. It is short, and it didn’t take me very long to read, but it’s sort of a thoughtful meditation of a book. I did have a few complaints, however. One is that Lee sometimes seems to speak her thoughts out loud to herself in a way that seems much more for the reader’s benefit than a natural habit. Another is an exchange near the beginning of the book where a character states “Middle Eastern men can be pretty controlling with the women in their family.” This is not critiqued at all. In fact, Lee agrees. It’s a bizarre bit of casual racism (I mean, so can American men. And European men. And… anyone.), especially considering that there are two characters that are African (from Guinea) and the subplot around activism in Northwestern Africa seemed respectfully handled. My only other quibble is that the traditional “girl loses girl” bit seemed a tad forced, though I can understand the character’s motivation. I did enjoy this book, with those caveats in place, and I appreciate this branching out from the typical lesbian romance novel conventions.