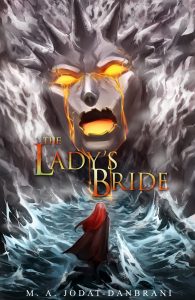 The Lady’s Bride is a fantasy novella that follows an unnamed woman on her quest to challenge the Lady: a woman with incredible magical powers, who tore their world apart many years ago. If she can best the Lady, then she take on the Lady’s abilities and hopefully change the world for the better.

I found myself a little thrown when I started reading this story. For one thing, the language and slang the characters use is not the kind I usually read in fantasy. It makes sense, since the protagonist does talk about herself as a simple country girl, but it was surprising to read phrases like “horse puckey” in a fantasy setting. We’re also thrown into the story, and in addition to not knowing anything about the world that we’re encountering, we also know almost nothing about the main character. For the sake of ease, let’s call the main character A, to avoid calling her “the unnamed protagonist” the entire review.

A is on a journey to confront the Lady, but that’s about all we know about her in the beginning. Why she has gone on this quest, what her history is, or even what her personality is like is only slowly revealed in the first few chapters, making it hard to get a grasp on the opening scenes. Soon is becomes obvious, though, that A is sincere in her desire to change the world. She sees how damaged the society she lives in is, how much people damage each other and ignore each other’s pain, and she wants that to end.

In every encounter, A is determined to be kind and giving. She really wants to do the right thing, even if she’s not yet sure what that is. As the story unfolds, we learn about the problems that exist in her world–how the different peoples have turned against each other, including dragos (humanoid dragonlike people), orcs, the water people, and humans.

While A is certain of her goal to confront the Lady, the path to get there is more unclear. A seems to stumble forward, tripping into mini adventures along the way. But while this muddled journey continues, there is a more subtle change happening beneath the surface. A is also on a journey of morality, one that makes her question her own core beliefs. In the beginning of the story, I was wary about the ahistorical way A seemed to view the world, but as she encounters new people and situations, her understanding grows, and she begins to incorporate that into her worldview.

There’s a lot to like about this novella. I did get swept along in the quest storyline, and although A can seem naive and over-the-top sometimes, I did appreciate her desire to effect real change in the world and her anger at apathy. I also became intrigued by the world. I would like to see more about the dragos’ culture, and I’d love to see illustrations or fan art of the water peoples–they seemed to have such interesting designs.

[spoilers, trigger warning:] I did want to give a warning that there is a queer woman character who is killed for homophobic reasons–this is a side character, and there are a lot of other queer women characters in the book (in fact, f/f relationships almost seem to be the norm in most of the story), but I know some readers do want to avoid that trope, even if it’s a small part of the story. [end spoilers]

Overall, I really liked this novella! I feel like there was opportunity to expand on the world and character depth, but for the length, it did a good job in hooking me. If you’re a fantasy fan, it’s worth checking this one out!

One note: this book isn’t actually published yet! It’s part of the Kindle Scout program, which means for the next month or so, you can read and excerpt and nominate it if you want to see it published. Here’s the link! 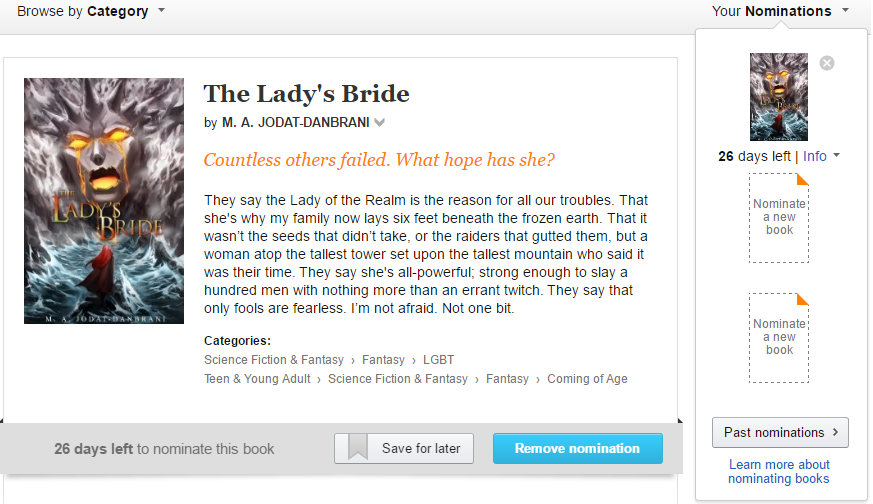