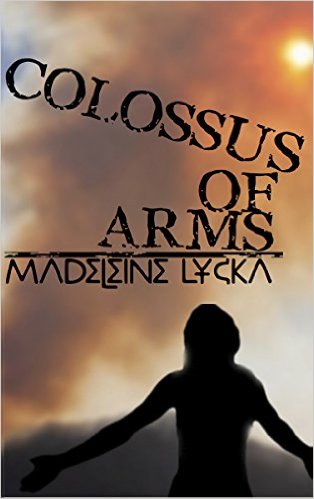 Colossus of Arms is a sci fi story that has just as much to do with marble sculptures and polyamory as it does with space travel. From the first chapter, it reads as a story about a space expedition–but the exotic locale the spaceship is hurtling towards is Earth. The crew mostly consists of the offspring of Earth emigrants. Post-global warming, the environment became hostile enough that most people who could leave, did. Now they’ve returned to gather biological samples to bring back home, and to visit the place where their species began.

Despite initial impressions, though, this is not the story of the spaceship’s crew. It’s Nix’s story: a sculptor rooted deeply enough in her art to have never left Earth. Nix is visited by these human/alien guests, who bring enough high quality marble to justify the inconvenience. More inconvenient than company, however, is the arrival of Torrance: the leader of the group, and Nix’s love of her life that she was separated from decades before.

I found the premise of this story really interesting: it mixes together the alien and the familiar, with Earth as an alien planet both to the visitors and to the reader. The climate has changed drastically, making it a very different world. The visitors are human, but they’re humans from a completely new culture and environment, bringing technology and attitudes that clash with Nix’s sensibilities. Despite the sci fi framework, though, this is primarily a love story. It’s the tension between Torrance and Nix that drives the story forward. How do you face seeing the love you left behind? Can you ever go back?

The other love story is with Nix and her artwork. It makes perfect sense that she works with stone. Her no bullshit attitude comes across as hard and abrasive, but like the painstakingly detailed sculptures she creates, there is tenderness underneath. I enjoyed Nix’s gruff attitude, and I especially appreciated having a 60+ year old woman as a protagonist.

Unfortunately, the centrality of Torrance and Nix’s relationship doesn’t leave much room for character development in the rest of the crew. In the beginning, I found it difficult to remember who was who, and even by the end, I didn’t feel like I had much of a sense of who Derthan and Gantu were (though Jansee did come into her own by the end of the story).

It’s always interesting to see how different cultures can influence each other, but one aspect of this that felt unnatural was the insistence on non-monogamy throughout the novel. The visitors live in a culture where monogamy is unheard of, and they’re horrified at the idea. This makes sense from their perspective, but Nix–who (theoretically) practices monogamy–seems to agree completely with them that it’s a terrible system that only hurts everyone involved, which made it seem more like A Message than a natural part of their interactions. This also leads to several scenes that are not entirely consensual–the crew regularly tries to pressure Nix into sex. And even after she establishes how her views on sexuality differ from theirs, Torrance still pushes more than felt comfortable for me as a reader, especially if I’m supposed to be invested in their romance.

The spaceship’s crew is made up of different races (supposedly for maximum genetic diversity, but considering that Africa has the most genetic diversity, I would have though that would make for a mostly black crew). Unfortunately, the descriptions of their races were uncomfortable, from the black character being described as having “espresso brown skin” (here’s why you shouldn’t describe skin colour using food) and “overly generous” lips, to Jansee being described as having “classic East Asian features”.

I did have a few other complaints about the writing. It’s heavy on the adjectives and similes, and when these sneak their way into dialogue, it feels unnatural. I just can’t image someone saying that when they look at their lover, they feel like they’re looking at “deep sapphire blue ocean water”. I was also looking forward to seeing how the central conflict of the novel would conclude satisfyingly–would Torrance and Nix find a way to stay together?–and was disappointed when a new conflict was introduced and wrapped up in the last chapter without addressing the main tension. (There’s also another detail I felt was left unresolved: why were there only single women living in the land surrounding Nix?) There were some plot developments that surprised me, but I would have liked to see an epilogue tying the loose threads together.

I was fascinated by the concepts that Colossus of Arms introduces, especially delving so deeply into the creation of artwork within a sci fi story, though I was hoping for a little more from the mechanics of the storytelling. It is always interesting to see authors explore different ways of writing within genre.