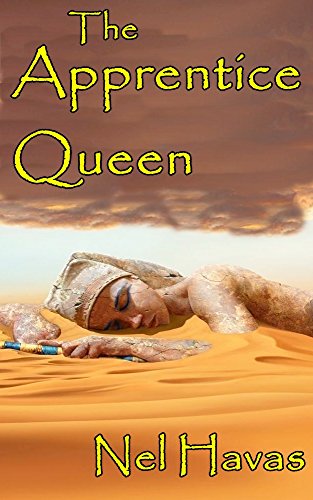 Mitti is only ten when she’s taken from her family to be trained as an apprentice to the queen of Egypt. Her parents, having grown up in this political world and escaped it, are horrified despite the huge gain in stature for their daughter. As Mitti grows up and becomes more and more embroiled in vicious court politics, she struggles to find the balance to survive in this environment without losing herself completely.

Apprentice Queen was an interesting read for me. I was immediately intrigued by the premise, which places the main character in an excruciating position. She is basically held prisoner by Sekma, the queen, who controls the political climate of Egypt from the behind the scenes and would have Mitti killed instantly if she were to disobey or try to escape this life. Mitti has to learn these lessons on politics by heart if she is to survive, but despite being exactly the protege Sekma is looking for, she loathes the queen and the position she has put Mitti in. In order to keep herself and her loved ones safe, though, she needs to use these same tactics that she has been taught.

Sekma is a dictator and is ruthless towards anyone who stands in her way, but as Mitti is taught how to navigate the political arena and the repercussions of every possible action, I found myself accidentally getting swept up in her logic, mentally nodding along to the sentiment that of course it makes sense to assassinate one person rather than allow a civil war that would slaughter thousands of innocent people. I had to abruptly pull myself out of the story when I realized the I was getting sucked into this tangled logic trap. It really show you how people become indoctrinated into this life.

This is a setting that I know very little about–the Ancient Egyptian royal court–but I felt completely immersed in it. I’m not usually someone reads political thrillers or books that deal with court intrigue, but I was interested in the directions that the book went in terms of political maneuvering. And it was nice to see the relationships between Mitti and other women seamlessly integrated into the story, neither the entire focus of the book nor swept under the rug. Mitti’s attraction to women is a driving force in her life, but it’s not the only one. It’s nice to read a story that balances those so well, not reducing her sexuality to a single line or paragraph, but also giving us something other than a romance or coming out story.

I did also have some issues with the book, however. The writing was overall functional, but there were some awkward sentences, and it has a habit of jumping back forth in time–first describing an event, then describing the lead-up to the event, then continuing from the middle again–and although it worked sometimes, I think it was overused. At other points, large periods of time are skipped, and there were some relationships that I would have liked developed more. My biggest problem was with the conclusion. I was enjoying Apprentice Queen‘s slow build, which establishes Mitti as a character and how she changes over time, and establishes all the nuances of the final conflict. As the pages began dwindling, though, I started to worry that it was not going to wrap up satisfactorily.

[spoilers, highlight to read] And sadly, I didn’t think it did. I had understood that she was likely going to kill Nyserra, but I was left still confused by why she did it, which was the mystery I had been waiting the entire book to find out–what could drive someone to do something so monstrous? Was the answer really just “To serve as a distraction”? I didn’t get enough explanation to see why that was necessary. I also felt like the disconnect between Nyserra and Kham happened abruptly. I would have liked to see their growing tension, instead of straight from blissfully in love to saying “I hate you”.

There were other details that I appreciated, including Mitti’s surprisingly positive relationship with her husband (though I didn’t like that she later thought his life was worth less than an animal’s and like it was cruel for him to be alive, considering he always seemed happy when she saw him)  and some of the interesting side characters that populate the book. On the other hand, I hated that the first time Kham and Nyserra have sex, Nyserra repeatedly tells Kham to stop and pushes her away. That’s not romantic, that’s rape. I know it’s not meant to be, but that’s how it’s written, and I hate when sex is described in that way. [end spoilers]

Overall, Apprentice Queen is a fascinating read for its exploration of how people adapt to a political life, but it also has some flaws that detracted from the reading experience for me. If you’re intrigued, I still think it’s worth picking up and giving it a try, but I wish the ending especially was a little more of a payoff.