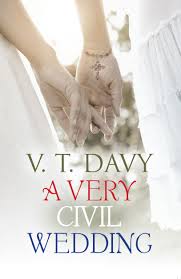 What an interesting book. A Very Civil Wedding follows the announcement that the Princess of Wales has gotten engaged… to her girlfriend. (This is set in 2014.) Following this is the media frenzy, the backlash, and the planning involved. The book is structured in all kinds of different snippets, arranged chronologically. These includes descriptions of a meeting of politicians, a blog post by an anti-gay activist, a news bulletin, a description of the princess and her fiancee having a conversation, etc. It reads less like a novel and more like living through a few months in the future. It felt surreal to read because it was so realistic. It really feels like the mishmash of information you would get if you were actually living through this, especially as, say, a family member of the people involved.

My favourite realistic element was the description of the media, which seemed extremely accurate. The sensationalizing Daily Express headline “UNAPPROVED SPERM DONOR MEANS QUEEN WILL NOT CONSENT TO ALEX AND GRACIE’S MARRIAGE” was especially, hilariously apt. It is this realism, however, that can also make A Very Civil Wedding a tough read. There is a lot of homophobic comments in this book from detractors, ranging between the pseudo-accepting “I love homosexuals, I just don’t think they should get married” to the openly hateful. Most of it, because it is mostly major media, is closer to the beginning of that spectrum, but that is painful enough to read, especially when it echoes things you can actually hear on the news right now.

The narrative presents both pro- and anti-gay protestors, including Christians on either side of that fence. I do, perhaps naively, think that the backlash presented is more extreme than I imagine would actually happen… Or I really, really hope it is. Of course, as a story, it is obviously in favour of this couple and their marriage.

I was surprised by this book. The format is so different from anything I’ve read before, and I really think it worked well. As I’ve said, it felt hyper-realistic: more like catching up on the news than reading a fictional narrative. That did sometimes work to its detriment, because there wasn’t a really fast-paced plot to pull me along, and the constant switches of perspective and medium could slow down my reading pace. (There was this little bit of mystery in someone’s journal entries that keep appearing throughout the book without having them named, however, and I thought that was a nice touch with a good reveal.) But I don’t think it was meant to be a quick, breezy read. It almost seems like a thought experiment. And I really think that A Very Civil Wedding succeeded in what it aimed to do.

That isn’t to say there weren’t some faults. Because of all the different people you encounter, I found that names ran together (especially when they were referred to by title or first name or last name). There were a few typos. The word “transsexulity” is used a couple times a catch-all term, instead of transgender. And towards the end, especially, there is a lot of religious speeches, if you’re not into that. One thing I was most worried about was the civilian (as opposed to politician, media person, etc) homophobic protester was a Muslim woman. I still think it’s a questionable decision to make the most prominent homophobic character a Muslim (there aren’t really many other people of colour characters that I can think of), but she does get to be a three-dimensional person by the end, so there is at least that.

I would definitely recommend this book, especially if you’re interested in the Royal Family, or like the idea of the different format choice, or are from the UK (though to be fair, I’m not, so I can’t say if there are any big inaccuracies). At the same time, if you’re not able to stomach reading homophobic comments and a sort of bittersweet depiction of the progress of gay rights, this probably isn’t the book for you.