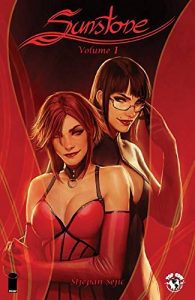 Kinky lesbian literature is hard to find. So when I hear of one that I haven’t read, and it has a good review or five, or a solid recommendation from a friend, I snap it up.

That’s how I found Sunstone by Stjepan Sejic, who is a Croatian comic book writer and artist, known for many different comic series. Sunstone happens to be the one where dominant-inclined Ally and submissive-inclined Lisa meet online and decide to get together in person, and we follow their sexcapades, their relationship, their falling in love, and their group of friends.

It was, though beautifully drawn, disappointing. Maybe if I wasn’t a nonbinary queer who has been kinky for 25 years and active in the leather and kink communities for 20, I would find this more relatable. It wasn’t that the information was wrong, it just felt like a very superficial sense of what kink is, and mostly just hung sexy kink illustrations around a weak story.

I hadn’t paid much attention to the author, just the title, when I ordered it, but a few chapters into it, I said to my partner, “I think this was written by a man.” And that was the other piece … though the story features two women as main characters and focuses on their sex and kink life together, it all reads as though it is for a male gaze. Both characters have ex-boyfriends, who feature prominently in the story and both sexualize them and think they are somehow responsible for their hotness, and there is just no context of lesbian community, identity, development, connection, lineage, or anything. It’s more like these two women live in a completely heterosexual world and just happen to find themselves compatible and together. In the beginning, they even have their relationship set up where they refer to each other as their “best friend” and think how great it is that her best friend can scratch that D/s itch that she has really wanted to be satiated and explored.

There was some representation of kink culture and community, but it was quite foreign to me — it didn’t feel like anything I’ve seen or witnessed; it read more like a fantasy of a kink community. And while that’s good and fine (for example, I did enjoy The Marketplace series by Laura Antoniou, which is absolutely a fantasy kink world), it just wasn’t clear to me if this was supposed to be a fantasy, or if this is what the author really thinks happen at kink clubs or in kinky lesbian bedrooms.

I also wonder about the cultural differences. I’m not sure English was Sejic’s first language, and sometimes I wonder if part of my critique is because it was in translation and that some of the cultural context didn’t transfer. Or, that coming from a United States leather community context, I just didn’t connect with it because he is referencing other kinds of communities in other places. So it’s possible that the things Lisa and Ally struggle with will still connect with readers, if perhaps you are beginning your journey into BDSM, and there are many sweet moments between them, and dozens of pages of smoldering hot illustrations.

Perhaps I expected too much of Sunstone — and perhaps I expect too much of queer, trans, and kinky literature in general — when I want it to be rooted in some sort of queer community or kink community. Or perhaps I am too self-centered, that I expect the queer and kink communities in books to be communities that I recognize. But either way, I was disappointed in the male gaze in this comic, but still enjoyed the beauty (and fetish) of it very much.