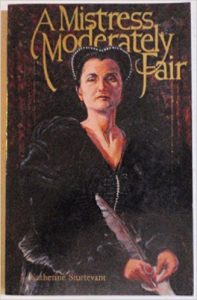 The English Restoration, i.e. when Charles Stuart II returned to England to take his father’s throne back from the Puritans, fascinates me for being a renaissance of both art and hedonism. Theaters opened again after being banned, and all kinds of sexual openness flourished. I purposely sought out queer lit set in this time period–not that there’s much, given that historical LGBT romance skews heavily Regency–and was rewarded with Mistress Moderately Fair by Katherine Sturtevant. I think it’s out of print, but WorldCat has it at these libraries and Amazon has used copies.

Mistress is about a woman who comes to London to become an actress, and in the course of doing so falls for the lady playwright who’s been helping her hone her skills. It delivers most generously on lesbian romance, on plot twists and turns, and on evocative language. The author’s also done a remarkably good job at bringing a time period to life pretty vividly without falling prey to “look at meeee, I’m so well researched!” I felt the exciting earthiness of the time.

The actress, who is going by Amy but that isn’t her real name–she’s the Beauty with a Mysterious Secret Tragic Past trope–is scarred across her face, prompting the line: “I know I have a garden in my face–the roses and the thorns.” How it got that way, and what she’s hiding from, comprise the main conflicts of the book. She’s never heard of queerness before she came to London, not understanding why she’s so immensely, irrevocably drawn to her playwright friend Margaret, until one of her fellow actors gossips to her about their gay boss. Wait, that’s a thing people can do? Is that why I–

And straightaway, beautiful sensual sapphic prose starts gushing out all over the reader:

“I have deceived you,” [Margaret] said. “I have no poetry to share with you.”

“You are deceiving me now,” Amy said in a shaking voice, “For you are yourself a poem, and I have been hungering for you to share yourself with me.”

Their sex scenes glorify in sensuality, with that enthusiastic appreciation of breasts that validates my own impulses so soothingly. Amy is “my type”–a buxom, squishy, gorgeous brunette with luxurious hair and a tragic past. Margaret is one of those independent, outspoken, able to live slightly outside of society’s rules widow characters. They have chemistry from their very first encounter, and are totally believable as a couple.

I love the way this book talks about writing inspiration and the way we create idealized and alternative versions of the people in our lives to interact with on the page. So very relatable.

The liveliness of the time period is evident in the snappy dialogue:

“I heard you had returned from the dead,” says the gay theater owner to someone recovering from violence. The man’s reply is “I did not like being dead, for the plays in heaven were quite dull and not the least bawdy.”

In one scene the two leading ladies recognize and mourn how it was easier for a man to be accepted for sleeping with men than a woman with other women, mainly because of misogyny. Incidentally this is a book that recognizes bisexuality as a phenomenon (without actually anachronizing by using the word), which was a nice touch.

My one quibble, and it’s a major one that’s the reason for the missing star, is the treatment of the book’s minor characters of color. Since it’s out of print, it would satisfy me deeply if this book were to return to print with those parts reexamined especially since they could be tweaked with zero impact on the actual story itself. I like the fact that the enslaved cook from next door insists right away that the main character call her by her real African name instead of the English name her own captor gave her–and that Margaret immediately does so–and I like the fact that the main character buys her and frees her at the end. But both she and her friend, another African captive, speak in broken English that felt awkwardly executed to me, and there are passages exoticizing her religious beliefs without actually adding anything to the story itself. I’m glad she was freed at the end but it would have been even more satisfying if she’d left England with the main character’s blessing after being freed instead of being asked to stay on as a servant and sneak out.

Trigger warnings: sexual assault in a flashback, and also for a brutal attack sustained by the gay supporting character from his lover’s brother’s henchmen. I found the lesbian positivity in the book so overwhelmingly affirming that it didn’t bother me as it ordinarily might have, but it’s there all the same.

Thank you for taking the time to read my review! I write more of them at http://shiraglassman.wordpress.com and on Goodreads, or check out my latest book, The Olive Conspiracy, Jewish fantasy about a young lesbian queen who must work together with her found-family, including her wife, a dragon, a witch, and a warrior woman, to save their country from an international sabotage plot.