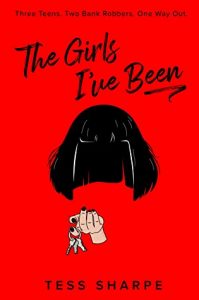 I’ve been a thriller fan for years, but I’ve always felt a little let down by the lack of queer representation in the genre. In recent years, things do seem to have gotten a bit better in this regard, but fast-paced, hard-hitting thrillers with female protagonists who aren’t straight still feel more uncommon than I’d like. So, I’m sure you can imagine how thrilled I was to stumble upon the gem that is The Girls I’ve Been, the latest young adult thriller by Tess Sharpe. Nora, our main character, is bisexual, in love with a girl while still nursing complex feelings for her ex boyfriend.

In many ways, Nora’s life is messy. Her ex boyfriend walked in on her making out with her girlfriend, and although she and Wes haven’t been together that way in quite some time, Nora can’t help but feel bad for the surprise seeing her with someone else must have been for him. Plus, the three of them have an important errand at a nearby bank, and it’s something none of them feels they can back out on. So, Nora, Wes, and Iris meet early in the morning to deposit the money they’ve raised for a fundraiser. Nora figures the errand might be a bit awkward, but she hopes those feelings can be worked through pretty quickly.

Things go from awkward to downright dangerous when two armed men enter the bank and announce they’re robbing the place. Nora is terrified, but she also knows staying calm is the very best thing she can do. You see, Nora’s early life was anything but ordinary. Up until she was twelve, Nora lived with her mother, a very successful con artist who thought nothing of making Nora a prop in her various scams. Through these unconventional and dangerous experiences, Nora has learned a ton about what makes people act in certain ways, and she’s confident in her ability to get herself and those she loves out of this in one piece, just as long as she can come up with a workable plan.

Over the next few hours, Nora fights desperately to escape the bank, using all the skills she learned from her mother, skills she hasn’t used in the five years since she and her older sister managed to have their mother put in prison. Fortunately for Nora, the skill of the con doesn’t wear off, and it doesn’t take long for her to once again comfortably inhabit the skins of all the girls her mother taught her to become.

The Girls I’ve Been is so much more than an action-packed thriller. Sure, it’s the kind of book you’ll hate to put down. The action is nonstop, and the author’s writing is incredibly engaging. However, if you look beneath the surface of the story, you’ll soon realize there’s so much more than just survival going on. Nora has been struggling to come to terms with her past for years now, and it’s only through her desperate fight to come out of the bank robbery alive that she realizes just how complex and multi-layered a person she is.

I loved Nora as a heroine. I found myself cheering her on, even when the tactics she used felt less than up front or honest. The traumas of her past have definitely left their mark on her, but Nora is determined to be a person in her own right, no longer subject to someone else’s whims. She doesn’t have all the answers, but that’s okay. So much of the joy I took from this novel came from watching her come into her own, even when she had to make serious mistakes along the way.

Parts of the book might be difficult for some readers. Nora experienced some terrible things as a child, and although the author doesn’t go into graphic detail about the abuse she suffered, neither does she completely shy away from it. It’s dealt with in a sensitive way, but it’s still something potential readers should be aware of before diving into this story.

The Girls I’ve Been really is one of the best thrillers I’ve had the pleasure of reading in quite some time. I literally read it in one sitting, and now that I’ve reached the end, I kind of want to go back and read it again, just so I can spend more time in Nora’s head.